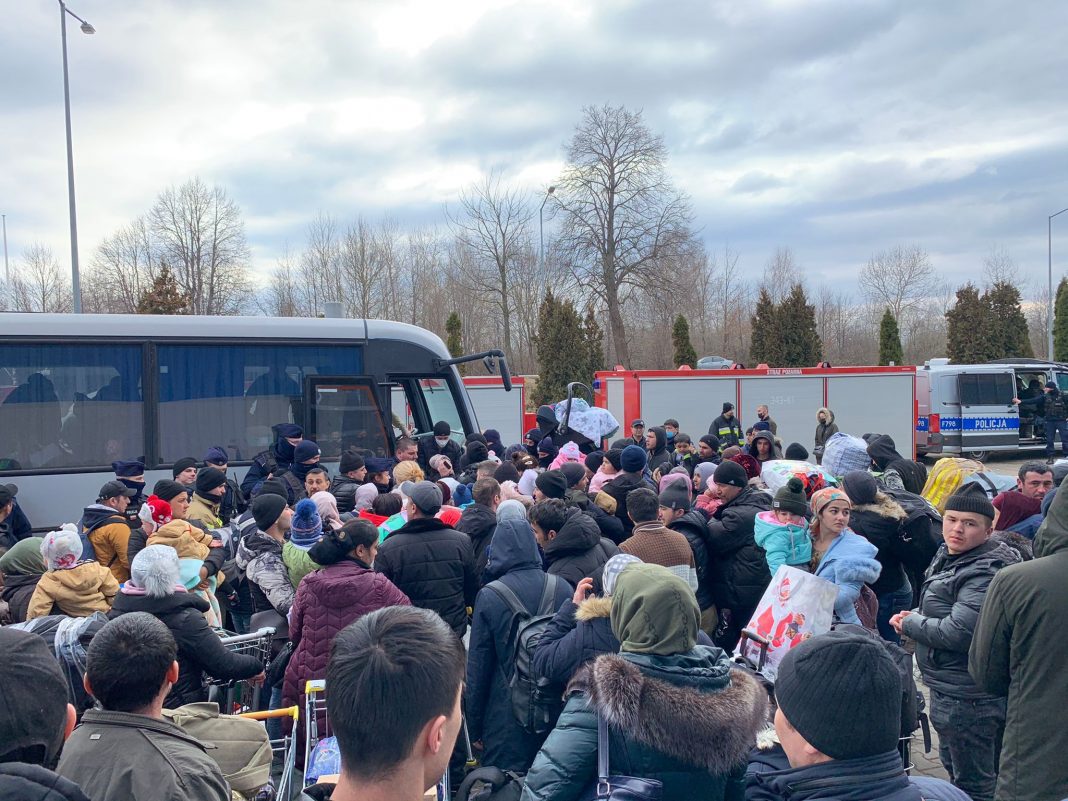 One million people have crossed the Ukrainian border in one week. An enormous, overwhelming and extremely rapid exodus, as emphasised by the United Nations High Commissioner for Refugees (UNHCR), Filippo Grandi, who said yesterday: “I have worked in refugee emergencies for almost 40 years, and I have rarely seen an exodus as rapid as this one”.

The NGO Intersos was among the first international humanitarian organisations to arrive on the ground. “Our choice,’ explains Giovanni Visone, the NGO’s director of communications, ‘was to organise an operational response that would be operational immediately. The organisation is therefore working in Moldova and in the first support point located at Korczowa, in Poland. “This is a converted shopping centre where thousands of people arrive every day. They are provided with hot meals, general information, but also initial medical and psychological support. There is an area with cots for people to rest. It is a centre where people stay only as long as they need to.

The NGO has a team of ten people on site, including two doctors. “The centre is open 24 hours a day, and our doctors have not yet managed to organise themselves into shifts because there are so many people who need help.

What are the most urgent humanitarian needs? “There are many people with chronic illnesses who need to restart their treatment as soon as possible, many women with very young children who suffer from respiratory problems. There are also many traumatised children who have stopped speaking, as well as women in shock. The psychological traumas that we are noticing and trying to follow up on are really manifold. We have also had some serious cases: a child who needed an urgent transfer to resume chemotherapy and a woman with serious post-partum complications who needed a transfusion. These are also the effects of war: all treatment stops and civilians stop being cared for.

The people fleeing arrive in Poland by the most varied means: some arrive on foot, some by train, some by bus, in collective vans or even some arrive at the border by car and then reach Korczowa on foot. “People arrive very tired after a journey of days and days. They need rest and medication for muscle problems due to fatigue. The humanity that arrives is also very diverse. The majority are of Ukrainian nationality, but not only. In a few days, I met a group of Jordanian students, an Indian boy who arrived on foot after a week’s journey, many people from Uzbekistan who wanted to return to their country.

Many of those fleeing have no idea where they will go. “Those who have no destination, those who are alone, are extremely vulnerable. Intersos activates various forms of protection for these cases. There is a great need to build a solid humanitarian protection network. It cannot be sufficient to entrust everything to volunteers.

The response of the Polish civil society has been good, but it seems that there has been no lack of racism towards those who do not have Ukrainian nationality. “From what I could see, there is a strong network of widespread reception, a lot of voluntary work, a lot of spontaneity. Of course we are concerned about racist episodes, as well as news of possible rejections for non-Ukrainians, but these cases are counterbalanced by an excellent response from the people, who, as far as we can see, have opened their arms”.

“In a humanitarian crisis like this one,’ concludes Visone, ‘we must reiterate loudly that the protection of civilians, of all civilians, must be our priority.

Intersos has launched a fundraising campaign to support the civilian population fleeing Ukraine, here is the link for donations.