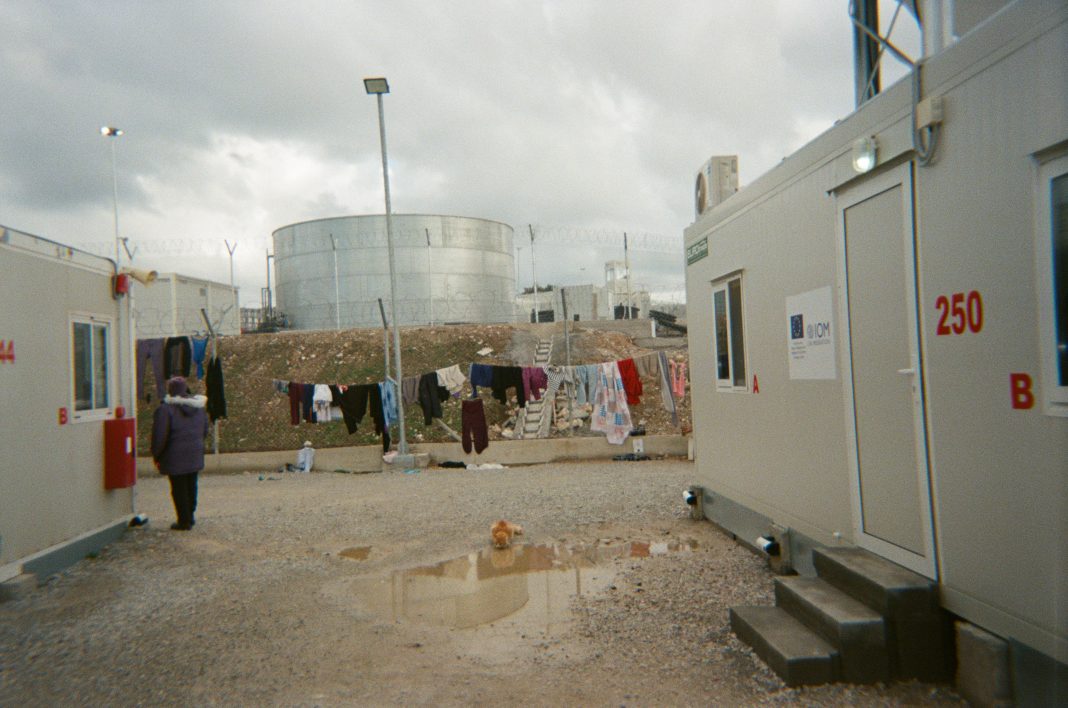 On June 20th, the International Refugee Day, we share the work of Europe Must Act and the Samos Advocacy Collective, reporting on the abusive and inhumane conditions the refugees undergo in the Samos Closed Camp. We are happy to share below their communique on the day their second report is launched – read the full report on this page.

“The refugee situation, as of today, needs to be dealt with as a matter of extreme urgency. In the Samos closed camp the refugees face every day confinement, isolation and social exclusion. This year, on World Refugee Day, Europe Must Act and the Samos Advocacy Collective are releasing their second report recounting the experiences of asylum seekers and refugees living in the ‘Closed Controlled Access Centre’ on the Greek island of Samos.

Following up on the previous report published in December 2021, “A Life Without Freedom Is Not A Life” is centred around the testimonies and personal experiences of the people living in the prison-like facility, providing yet another evidence that the EU-funded centre does not uphold the fundamental rights and freedoms of people seeking sanctuary and that the improved living conditions promised by authorities at the opening of the camp are only a broken dream. Since February 2022, not one single stable doctor has been operating in the whole facility. Prince*, a camp resident from DRC “Health doesn’t have a price. Where you don’t have access to health care, it means risking death.” Last May, a technical problem causing a water shortage left camp residents with limited to no access to tap water for 15 consecutive days. Drones, CCTVs and high police presence are supposedly implemented to ensure the safety of the camp residents. Instead, their right to a private life and possibility of feeling safe are entirely compromised.

An asylum seeker from Sierra Leone said: “a detention camp or a camp for asylum seekers? We are no longer free to live our private lives.” The possibilities of leading a full life are close to zero as camp authorities continue to impose draconian movement restrictions prohibiting residents from leaving the camp.

David* recounts his experience of being woken up in the middle of the night by the police, being apprehended and taken to the police station where he was arbitrarily detained in a cell with appalling conditions for three days. He recalls the nights spent in the camp saying: “I was sleeping, [it was] 4 to 5 in the morning, and then the police people knock on [my container] and I wake up. There were more than 15 police of icers.” “I said: let me take on some long trousers, because [it] is too cold. I got one jacket, They said “no”.” He was handcuffed and “there [were] some police of icers hitting me by my back”, saying “faster, quickly”.

Cecilia Sanfelici, Aegean Advocacy Coordinator for Europe Must Act says: “While many of the problematics that we denounced in the previous report have been left unchanged, the direct accounts of camp residents now reveal even more serious and alarming issues – police violence and arbitrary detention being some of these. As Europe and Greece have been welcoming people fleeing Ukraine with open arms, people seeking sanctuary in Samos continue to be subjected to inhumane and illegal practices. Yet another time, this report makes it crystal clear why camps are not and will never be a safe and humane reception solution.”

The testimonies of the camp residents are clear of what the authorities’ priorities should be: “Even if there are restaurants, even if they give free food ten times a day, that doesn’t matter to us. What matters is freedom of movement.”  David* says: “you can’t walk freely, you can’t go out as you want, you always stay inside. You sleep, you get up, you come outside, you stand, [you] look the containers. You go inside, you sleep, you get up, you sit down, play with your phone, go outside, you look the containers, take a stretch, go inside. Just like that. What matters is freedom of movement. To move freely.”

The testimony given by David actually shows one of the most inhumane matters that characterise the life of the refugees in the closed camps: the social exclusion. For many it is extremely complicated to leave the camp to reach the closest city next to it. The social marginalisation issue gives an exponential social disadvantage, alienating and relegating them to the outer edge of society.

The Samos Advocacy Collective says: “We must listen to those who are living inside the EU-funded CCAC – people who are living the daily consequences of migration policies and strategies. We must listen to the overwhelming number of testimonies that state that such policies have the agenda to dehumanise, deter and violate those seeking safety in Europe, and collectively demand that the competent authorities ensure the human rights, safety and dignity of displaced people.”

As the UK has recently opened its first centre based on the “Greek model”, the recent developments are alarming: police violence and restrictions are turning the Samos CCAC into an increasingly repressive and abusive environment. The brutal situation denounced in the present report has the aim to call out for more action: death and exploitation of refugees and asylum seekers must be not just contrasted but even prevented and most of all it must be harshly condemned at a national and international level.”

*: David is a Fake name to protect the person’s identity.

Find more about EMA – Europe Must Act on their website

The Samos Advocacy Collective (SAC) is a collaborative project of individuals, NGOs and human rights groups operating on Samos. The collective advocates for fair and dignified migration policies, especially focusing on reception conditions and the current situation on the island for displaced communities.

Cover Image: Kindly provided by Europe Must Act and The Samos Advocacy Collective.