Home Human Rights Where did you get your Coltan? A hearing at the European Parliament... 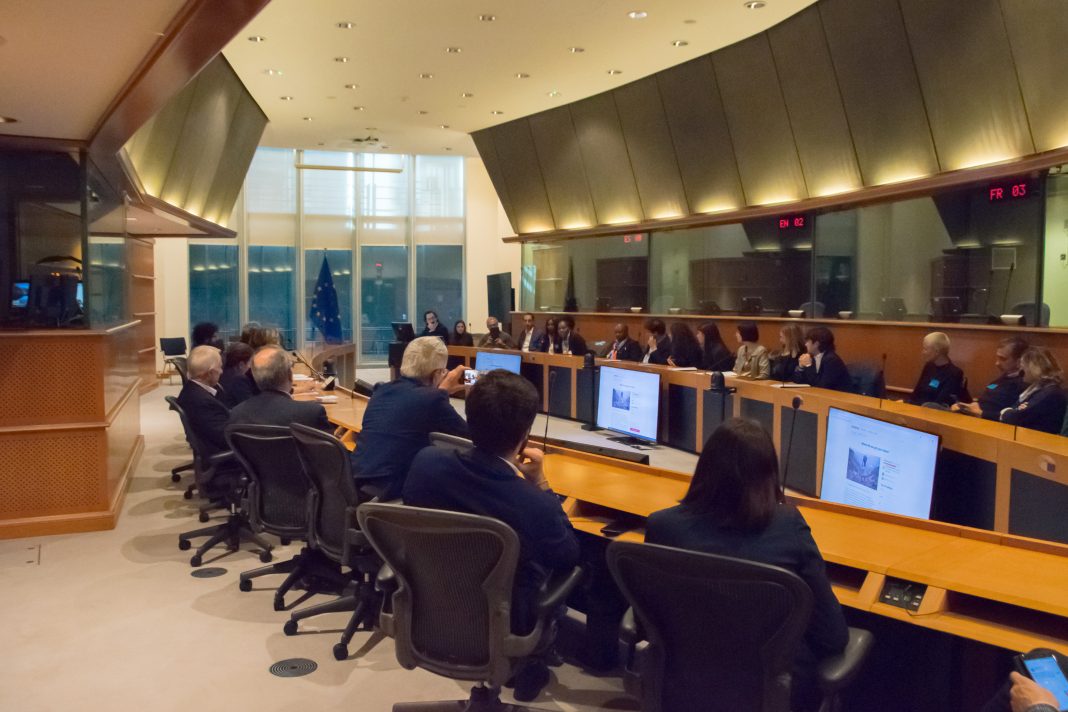 How can wee understand and monitor the supply chain of minerals from conflict zones, from extraction to disposal? This was the big question posed in the European Parliament by a delegation of the caravan “Where did you get your coltan?”, a civil society movement born to grow the general public’s sensitivity on the topic. On October 11, in fact, the relay race that set off in May 2022 arrived in Brussels. Started in Empoli, central Italy, the relay climbed Italy and Europe upwards, with stops in Bologna, Carpi, Verona, Brescia, Milan, Strasbourg and Aachen. The goal was to arrive at the European Parliament and intervene at a hearing. Here, the representatives of the two associations Safari Njema and we are the Mediterranean (Mediterraneo Siamo Noi), together with other realities that have taken part in the project from the beginning, including the Atlas of World Wars and Conflicts, had the opportunity to speak with seven MEPs: Giuliano Pisapia, Pierfrancesco Majiorino, Patrizia Toia, Pietro Bartolo, Alessandra Moretti, Camilla Laureti and Maria Arena.

The aim of the meeting: to deliver the signatures collected in the civil society petition and, above all, to bring ideas and suggestions to amend the 2017 European Regulation 821 on conflict minerals, which is due to be revised in spring 2023. The project presented in Brussels was focused on the Democratic Republic of Congo and on how the extraction of materials such as coltan, necessary for the production of technological devices, has been causing violence, death and war for years in the regions of North and South Kivu. The meeting was attended by a Congolese delegation working with Denis Mukwege, a gynaecologist and Nobel Peace Prize winner, known as ‘the man who repairs women’ after the rapes and violence they have suffered.

“We believe,” said Bianca Maestrelli, one of the volunteers, “that the silence and conspiracy
of the Western world must be stopped: it can no longer exist that e
ntire populations pay the price of our comforts on their skin.

The silence which people like Luca Attanasio, the Italian ambassador killed in February 2021 in North Kivu, tried to oppose on a daily basis. The project is also inspired by his figure, which was mentioned several times during the hearing.

There are three main points in the regulation on which the caravan delegation asked for attention. ‘The text,’ explained Margherita Maestrelli and Giulia Marconcini, ‘only discusses imports, without touching on the issue of mineral extraction, which is precisely where the most problems arise from the point of view of labour exploitation and the lack of respect for human rights. The guidelines adopted by the OECD (Organisation for Economic Co-operation and Development) on the duty of care for responsible sourcing of such materials is in fact insufficient, as it appears as a mere invitation to comply with the duty and not a stringent obligation’.

Another major problem is the sanctions provided for those who transgress. ‘We believe,’ Valerio Leotta argues, ‘that the new regulation should impose a high minimum fine, which is at least higher than the average cost of an internal audit, necessary to provide the documentation required by the regulation. This is to discourage companies from paying the fine rather than being diligent and transparent’.

A third issue addressed is the ecological one. “Batteries,” the volunteers continued, “are often buried in the same countries where cobalt or other materials have been mined. We hear a lot about the ecological revolution and how green cars will save the planet from pollution. We, on the other hand, are extremely concerned as we are aware that minerals are found in them that in most cases are illegally mined and imported’.

“As consumers,’ Giulia Marconcini and Caterina Campigli concluded,
‘we would like to be aware of what lies behind the manifacturing of products
we use every day, so that we can make conscious choices that respect the rights of others.”

Cover image and all pictures in the article: Valentina Ochner, Brussels, October 11, 2022. All rights reserved.