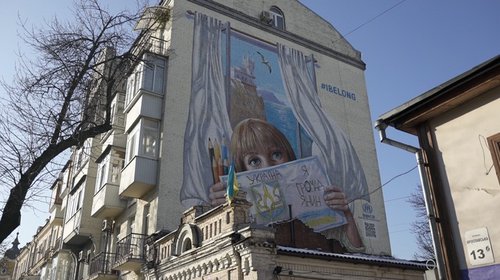 In recent years, in Ukraine, street art has become an integral part of the landscape. Among the rubble of the war caused by Russia’s invasion now likely hide pieces of art that represented a real tool for community expressions and claims of freedom. That’s why we want to honour those stories, hoping that not all murals will go destroyed in this senseless war.

Street art is often a reflection of issues that affect local populations and it is used as a tool to demand change. This is why the 2014 Revolution of Dignity, the occupation of Crimea and the conflict in eastern Ukraine created an explosion of colourful drawings and female portraits symbolizing peace and freedom. Some of the most significant features of these murals are the bright colours, the fact that they portray female figures, symbols of peace and freedom and the complete absence of war and violence imagines.

These works are based on the belief that mutual listening through art is an essential step to encourage mutual understanding and reconciliation and that often the most effective action for peace-building is to take creative and innovative paths that leads to changes in people’s attitudes and values.

One of the most relevant murals that we can mention “The Berehynia”, a goddess in Slavic mythology represented by a Ukrainian woman who tries to protect her nation and send a message of peace, surrounded by national flowers symbolizing connection with the earth and with those who are no longer there. The woman’s eyes are closed, and this symbolizes concentration and a moment of prayer for peace. The mural is located in a place that was the symbol of the outbreak of the Ukrainian Revolution of Dignity of 2014, Independence Square.

Another mural, entitled “Fredoom”, was painted by Alex Maksimov, and represents a bird upside down holding a light bulb that incorporates the window of the building. This represents a kind of barrier between people and the outside world and the need to break the glass so that we can witness the change and be free. In addition, this work is part of the project Art United Us, an international project that believes that through artistic and creative means, you can collaborate with communities in raising public awareness of the problems of war, aggression and violence. The project has been successful: about 200 walls were painted in two years.

In the heart of Kiyv, we then have “The Rebirth”, a Ukrainian woman who rises above the houses, thus symbolizing her being the protector of the city. With the hair of yellow and light blue, and a wreath of flowers becomes the symbol of the country. She also wears the same military jacket that the rioters of Independence Square wore, holding a boy on his knees in his right hand. With this image, the work wants to pass the message of awareness of the destruction that takes place after a war but at the same time the will of reconstruction and rebirth of the Ukrainian people.

These murals represent the story that the Ukrainian community wants its walls to tell. In this sense every design becomes powerful because it conveys the message that civil society wants to make its own: peace and rebirth.

Cover image: “A little citizen”, a mural by Kateryna Rudakova with support from the United Nations High Commissioner for Refugees (UNHCR).

Find out more about the murals