Home World America The two G20’s, between Washington and Kabul 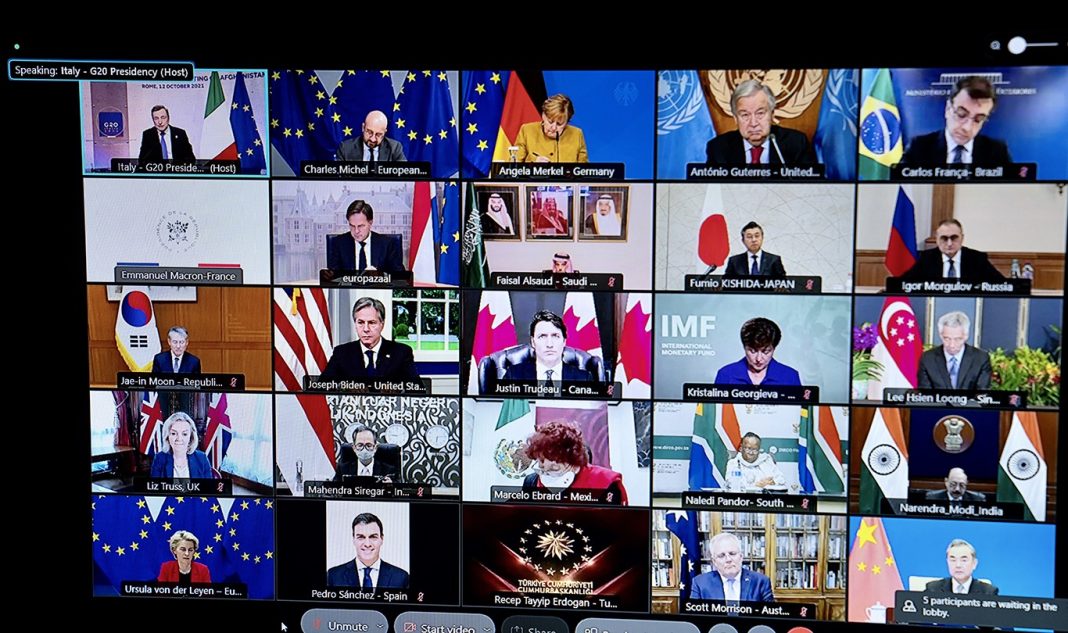 The “G20 Afghanistan” ended on October 12th in Italy, and on the following day the Finance Ministers and Central Bank Governors of the Twenty Summit (Fmcbg) met in Washington, at the headquarters of the International Monetary Fund. it was the fourth meeting under the Italian presidency, for the forum that gathers 20 countries as well as the EU. This summit is held on the occasion of the annual meetings of the International Monetary Fund – World Bank Group (WBG).

As part of the Italian Presidency of the G20, and following the initiative of Prime Minister Mario Draghi, the extraordinary meeting of G20 leaders on Afghanistan was held in virtual mode. The G20 has put on the table aid for one billion euros (part of which had already been allocated) which must follow the indications contained in the final communiqué, a list of provisions on the multilateral level (a victory claimed by Draghi) that sees in first place the UN but also other international financial organizations (which, after the Afghan crisis, had blocked loans to the country). Some provisions also contain indications for the Taliban: access to the airport and the country for humanitarian and diplomatic personnel (a note that can also be seen as an indirect opening to resuming contacts with the Afghan regime), freedom of movement for those who want to leave the country, and the inevitable reference education and women’s rights especially (no mention was made of freedom of press in particular) as well as the commitment to countering terrorism.

For Draghi, the meeting was a “success”, as it gave a mandate to the UN and underlined the strength of multilateralism with the indication – which overcomes Italian reluctance – of the need to negotiate with the Taliban, even if negotiating does not mean recognizing them. Instead, the G20 recognized an imminent humanitarian crisis that could implode in the country and which called for swift action. But, in a more critical reading, the virtual meeting led by Rome also presented many shadows, apart from shedding some light: first, there is the absence of two important regional partners, Pakistan and Iran. In order not to irritate Delhi and Riyadh (members of the G20), the two countries have not been invited, a move that invalidates the call for collaboration with neighboring countries. Finally, the absence of Chinese President Xi Jinping (represented by his Foreign Minister) and the total absence of Moscow (neither Putin nor Minister Lavrov attended) indicate the limits of a multilateralism that, at the moment, cannot count on the two giants of the area in which Afghanistan is located.

As for Finance Ministers and Governors, after the third meeting of the FMBCG in July (held in Venice), the G20 members are set to continue their discussions on issues related to the international economy and global health and on efforts to promote more sustainable growth. While the global recovery has proceeded at a solid pace, mainly thanks to vaccination campaigns and robust political support for the economy, the problem in the foreground is the unevenness of growth between and within countries.

Economic planning for countries in need

The problem for the G20 is set to be on how to support vulnerable countries hit by the pandemic. Following the IMF’s general allocation of $ 650 billion in special drawing rights (SDRs), the discussion will now focus on options to voluntarily channel a portion of the SDRs allocated to help those countries versing in critical conditions. France is pushing for rich countries to authorize new SDRs, so that Africa eventually receives a total of $ 100 billion. To achieve this, the IMF will have to find an effective mechanism. (Special drawing rights, in French droits de tirage speciaux, abbreviated DTS, are a particular type of currency. This is the unit of account of the International Monetary Fund, the value of which is derived from a basket of national currencies, with respect to which a sort of “common denominator” is calculated: the result is the value of the SDRs. The main purpose of the SDRs was to replace gold in international transactions: for this reason the special drawing rights are also defined as “paper gold”. Editor’s note).

IMF director general Kristalina Georgieva said the world is facing “a worsening two-speed recovery” in part caused by differences in vaccine availability. “This is a critical moment that requires urgent action from the G20 and policy makers around the world.” Another problem on the Ministers’ and Governors’ table is the Common Framework for Debt Treatment, another one of the burdens that continue widening the gap between poor and rich countries. A response that goes beyond that is the Debt Service Suspension Initiative (DSSI):  the suspension of the payment of interest on the debt, which provides for the replenishment of the funds of the International Development Association – IDA – whose resources must be refinanced every three years. The reconstitution negotiations represent an opportunity to discuss the strategic and operational orientation of the fund.

Given the growing relevance that green issues are having on the G20 agenda, participants discussed options for strengthening coordination in addressing climate change. In July, in Venice, the G20 had decided to promote a transition towards greener, more prosperous and inclusive economies and societies: in this occasion, the G20 is called to give substance to the declarations of principle given three months prior. In line with the 2030 Agenda for Sustainable Development and the goals of the Paris Agreement, members are expected to approve the G20 Roadmap on Sustainable Finance, which was prepared by the Working Group on Sustainable Finance.

In addition to strictly economic issues, the G20 will address concerns that the rise of the rapidly spreading Covid-19 Delta variant, combined with unequal access to vaccines, places on global economic recovery. A calculation by the Reuters news agency on new Covid-19 infections shows that the pandemic is on the rise in 69 countries, with a daily rate pointing higher since the end of June and now hitting 478,000. “We all need to improve our vaccination performance anywhere in the world,” French Finance Minister Bruno Le Maire told reporters. “We have very good economic forecasts for the G20 economies, and the only obstacle on the way to a quick and solid rebound is the risk of hitting a new wave “.

This statement, while emphasizing support for a “global fair sharing” of vaccines, had not proposed new concrete measures, merely recognizing a “recommendation” for 50 billion dollars in new funding for vaccines by the IMF, the World Bank , the World Health Organization and the World Trade Organization. But the real problem, which affects the economy, health, and world peace itself, is inequality. Even within Europe, post-pandemic  recovery is “highly uneven”, according to the European Commission, which this week predicted that Germany and the Netherlands will reach pre-crisis production levels a year earlier than Italy and Spain. This phenomenon is occurring all over the world, foreshadowing an increase in disparities between countries and regions. But, of course, the gap is precisely between the G20 countries and the poorer countries. The IMF is pushing all G20 countries to establish a clear path that will lead the rich countries to contribute about $ 100 billion of IMF reserves to the poorer countries.

Food insecurity and the costs of war

In the meantime, 11 people across the world risk dying of hunger every minute –  almost double the victims caused by Covid 19, which kills 7 people per minute. The spike in food prices caused by the pandemic fuels a 40% increase in the risk of starvation according to a July 7 Oxfam report. According to Oxfam, the number of people on the brink of famine has grown six times over the past year. 155 million people live in a condition of food insecurity, 20 million more than in 2020. All this is triggered by a 40% increase in global prices, the highest in the last 10 years.

The first cause is war:, added to the economic and climate crisis, conflicts are leaving 100 million people hungry in 23 countries: here, almost 100 million peoplelive in situations of food insecurity. Over half a million more people in the last year found themselves on the brink of famine. “We are facing the perfect storm in which wars, pandemics and climate chaos hold helpless populations in a vice that leaves no way out. – said Francesco Petrelli, food security policy advisor of Oxfam Italia – In many areas crossed by bloody conflicts, the lack of food continues to be used as a weapon, leaving people without water or basic necessities and preventing the arrival of humanitarian aid to the most affected communities. Faced with all this, we must therefore ask ourselves, how millions of people in already very poor countries can cope with even the most basic daily needs, with the pandemic still underway; if the market next to home is bombed and the crops and farms they depend on to survive are destroyed. “

Despite the pandemic, global military spending has increased by $ 51 billion, a figure sixfold and half higher than the total funding requested by the United Nations to tackle the growing hunger worldwide. The ongoing conflicts also led to a record number of 48 million internally displaced persons at the end of 2020. The food emergency is also being perceived in middle-income countries, such as Brazil and India, where the virus is still widespread. In Brazil, the number of people affected by extreme poverty has tripled, from 4.5% to 12.8%, with about 20 million Brazilians reduced to starvation. The federal government has only provided support for 38 million vulnerable families, leaving millions without a minimum income.

An optimistic voice: “Global economies are working together again,” said Rosamaria Bitetti, economist at the Luiss University of Rome. “This is a huge opportunity for the G20 to think about how this pandemic has shown that in our interconnected world, problems are global and must be addressed together, leaving nationalisms behind.” Meanwhile, Janet Yellen, Secretary of the Treasury of the United States, urged the other countries not to prematurely withdraw the fiscal measures linked to the pandemic. She suggested they should push for long-term plans on promoting economic growth, pointing to President Joe Biden’s proposals for infrastructure spending, workforce support and green investment.

This emphasis also signals that, at least for US officials, maintaining the ongoing economic recovery is even more urgent than fears of inflation. The same is true of Europe, with countries still wary of removing the generous stimulus too soon and the European Central Bank minimizing price concerns. The meeting was followed by a press conference co-chaired by Daniele Franco, Italian Minister of Economy and Finance, and Ignazio Visco, Governor of the Bank of Italy and their respective deputies, Alessandro Rivera and Luigi Federico Signorini.