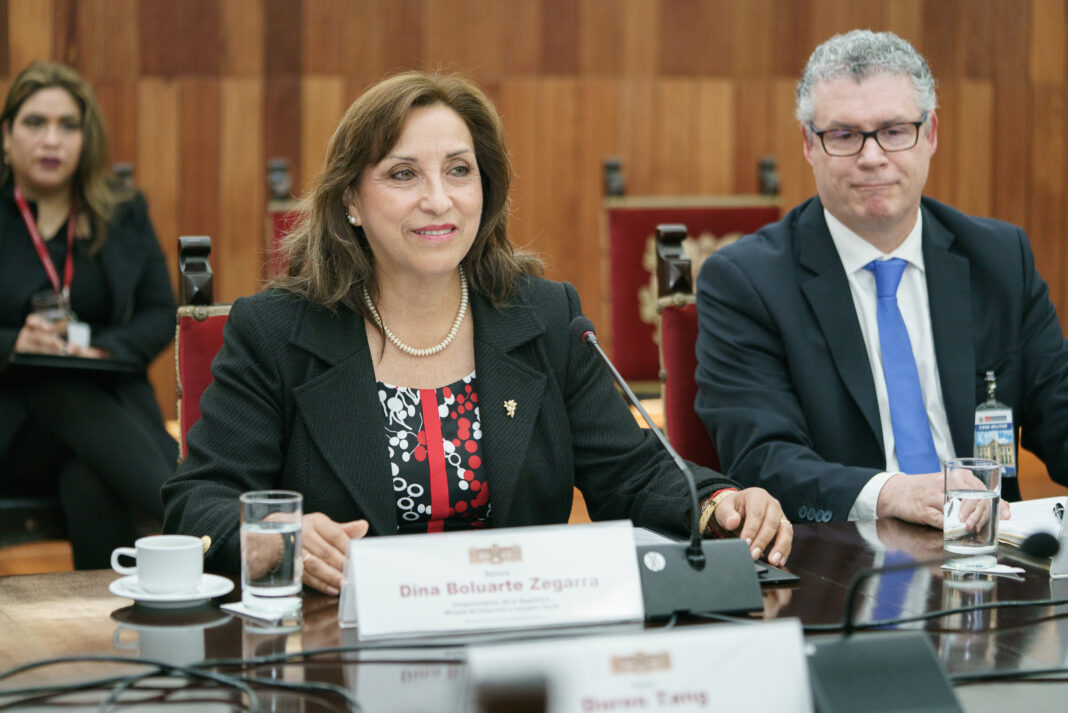 Clashes in the province of Chincheros, Apurímac, between members of the community and the national police resulted in the death of a second person. This brings the number of dead in Apurímac to four,’ writes El Comercio, ‘and there have already been five deaths across the country in protests over the failed coup d’état of Pedro Castillo and the assumption of Dina Boluarte as president.

Dina Boluarte is the new President of Peru. The 60-year-old lawyer, who until last week held the position of vice-president, took office after what has been described as a self-righteous coup by President Pedro Castillo, who was arrested and removed from office by a vote of impeachment after he had dissolved Congress in a last-ditch attempt to stay in power. Ignoring Castillo’s attempt to dissolve the legislature by decree, parliamentarians went ahead with the already scheduled impeachment vote, which ended with 101 votes in favour of his dismissal, 6 against and 10 abstentions. The outcome of the vote was announced with loud applause and the assembly chose Boluarte to take office. The affair sparked protests and clashes in several areas of the Andean country.

Boluarte is the first female president of Peru. In her inauguration speech, she called for a political truce and the establishment of a government of national unity. ‘What I ask for is a space, a time to save the country,’ she said. Earlier, at the end of a convulsive day, Castillo had been arrested by the national police in Lima. while trying to reach the Mexican embassy to seek refuge, on charges of violating the Constitution.

After Castillo’s attempt to deprioritise Parliament in order to replace it with an emergency government, Vice-President Boluarte had written on Twitter: ‘I reject Pedro Castillo’s decision to perpetrate the collapse of the constitutional order by shutting down Parliament. It is a coup d’état that aggravates the political and institutional crisis that Peruvian society will have to overcome with strict adherence to the law’. Peru’s new First Citizen is not part of the opposition: she was Vice-President and Minister of Development and Social Inclusion under President Pedro Castillo. Before that, she was senior director of the National Registry of Identification and Civil Status (RENIEC) from 2007 to 2022.

Boluarte was born in Chalhuanca, Apurímac, on 31 May 1962. She is fluent in Quechua, the language of the inhabitants of the altiplano, In 2018, she ran unsuccessfully for mayor of the Surquillo district of Lima, representing the Peru Libre party.She also participated in the extraordinary parliamentary elections of 2020, but did not win a congressional seat. In the 2021 presidential elections, she was part of Pedro Castillo’s presidential ticket, which won in the runoff by a narrow margin over Kiki Fujimori. On 23 January 2022, during an interview, Boluarte stated that he had never embraced the ideology of Peru Libre. The general secretary of the party, Vladimir Cerrón, subsequently expelled Boluarte. . On 25 November 2022, she resigned as Minister of Development and Social Inclusion, but remained as First Vice-President.

Peru’s crises are constant. The judiciary is considered the most corrupt institution in the country, constitutional guarantees for a fair trial are selectively enforced and the poorest are assigned incompetent court-appointed lawyers, abuses committed by the security forces are rarely punished, and the same goes for crimes committed against environmental activists. While journalists are subjected to intimidation and acts of violence In the parliamentary elections, which took place at the same time as the presidential elections, the moderate and radical right-wing parties won 80 out of 137 seats, an overwhelming majority that has continually put a spoke in the president’s wheel and three times attempted to remove him through impeachment.

But the very large majority (101 votes) with which Castillo was ousted and Vice-President Dina Boluarte was installed indicates that not even among his supporters was the authoritarian attempt by the ex-President accepted, which took place by announcing early parliamentary elections and the possible launch of a new Constitution. The president’s term of office has been marked by problems and instability since July 2021. Underlining this are the dozens of ministers appointed, replaced, sacked and the five investigations against him that see him accused of, among other things, using his position to obtain benefits for himself and his family. Castillo had accused Attorney General Patricia Benavides of persecuting him and attempting a ‘judicial coup’ against him. The Prosecutor had reacted by siding with the Parliament.

The Peruvian president, according to the World Politics Review, made a series of mistakes that facilitated the opposition’s task and led him to dig his own grave. His promise not to form a radical left-wing executive if elected was broken with the appointment as prime minister of Marxist-Leninist Guido Bellido, later replaced by the more moderate Mirtha Vasquez. Castillo appeared in a video in which he was seen entering a building with a lobbyist from a construction company that shortly afterwards won a $64 million contract. The Head of State, who has never given interviews or called press conferences, defended himself by rejecting the accusations. His popularity rate has collapsed, partly due to the mismanagement of Covid, strikes in the mining regions and economic problems.

Boluarte presented her government as demonstrations broke out all over Peru. Protesters are demanding her resignation and the calling of general elections to replace her and Congress. Boluarte said she should be allowed to hold office for the remaining three and a half years of her term. But protesters are calling for new elections. Some of those demonstrating in support of Castillo have called her a ‘traitor’. Boluarte’s cabinet includes lawyers Pedro Angulo, an anti-corruption prosecutor who has been appointed prime minister, and Alberto Otárola, who will serve as defence minister, Alex Contreras and Ana Cecilia Gervasi as economy and foreign affairs ministers, respectively. Both previously served as deputy ministers.