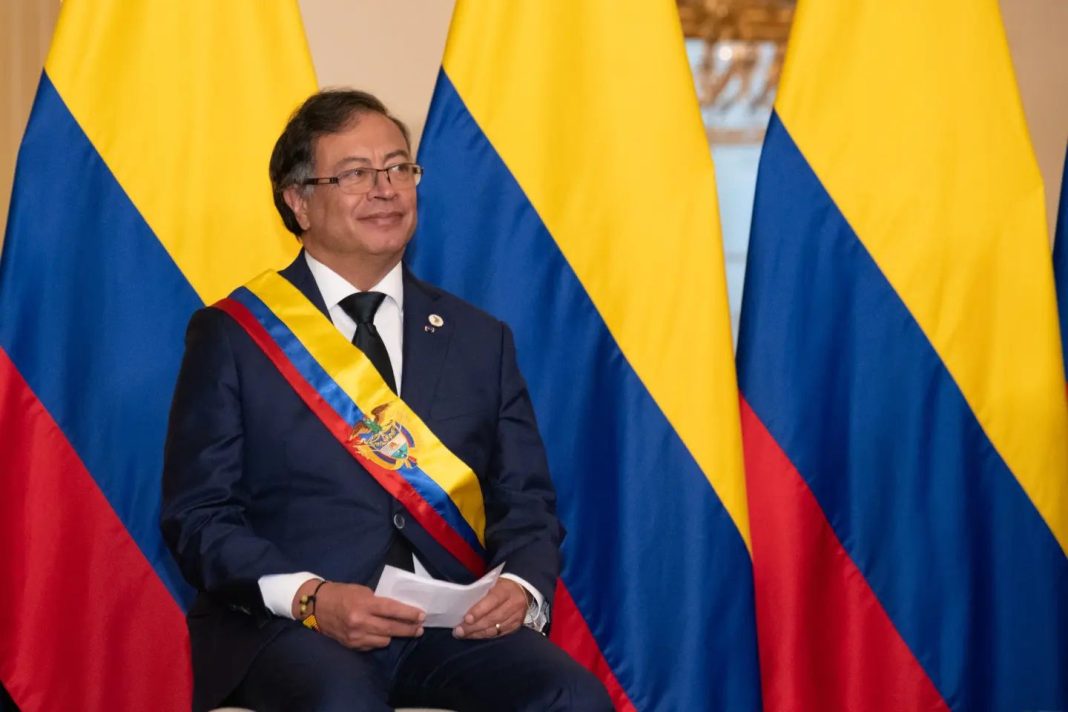 Gustavo Petro, the country’s first left-wing president in the 200 years of its independence, took office as president of Colombia on 7 August 2022. “This is the government of life, of peace, and it will be remembered as such,” Petro said in his inaugural speech. “Life must be the basis of peace. A just and safe life. A life to be lived with gusto, to be lived happily, so that happiness and progress are our identity. “Today begins the Colombia of the possible’. The previous day Petro had celebrated in Bogotá, of which he was mayor, in front of a representation of indigenous people, people and minorities. ‘A cold palace awaits me, so I receive this popular and spiritual mandate with great emotion. Not to forget the realities we have to face from now on. Things will undoubtedly change.”

A symbolic aspect played in the inauguration ceremony was the sword of Simón Bolívar. On 17 January 1974, the guerrilla movement Movimiento 19 de Abril (M-19) stole the sword from the Quinta de Bolívar, inspired by the theft of the 33 Orientales flag by the Tupamaros (of which Pepe Mujica was a member) in Uruguay. The theft of this symbol was the first act of the guerrilla movement and remained in their possession until 1990.

In the words of the Libertador it was not to rest until the ideals were affirmed – the historic weapon was returned to the state when the M-18 signed the peace agreement and laid down their arms. returning to civil life. And Petro had requested that the sword be present when he was sworn in, despite the refusal of the outgoing president, Iván Duque, to remove it from its place of safekeeping.

The ceremony was attended by the presidents of Argentina, Alberto Fernández, Chile, Gabril Boric, and Bolivia, Luis Arce. And even the King of Spain, who refused to stand up when the sword – used by Bolivar in the wars of independence against the Spanish – made its appearance. The gesture of imposing the sash on Petro was entrusted to Senator María José Pizarro, daughter of the commander who demobilised the M-19, and who was later assassinated when he was a presidential candidate.

The ‘total peace’ mentioned by Petro entails the disarmament of the National Liberation Army (Eln), the last active guerrilla group. But also the defeat of drug gangs, such as the notorious Gulf Clan, which despite the immense damage they do to the community and the obstacle they pose to social development, continue to generate huge profits. In this regard, he proposed a shift away from prohibitionist policy. “The war on drugs has strengthened mafias and weakened states (…) led states to commit crimes and evaporated the horizon of democracy,” he said.

But tax reform, health and pension reform, labour law, radical education reform, all have an economic price to pay. Moreover, the peace agreement with FARC envisaged radical agrarian reform, allocating land to farmers who do not have it, and state support for rural development. All this while implementing the energy transition to replace fossil fuels with clean sources and eliminate the economy’s dependence on coal and oil exports.

Petro’s planned tax reform should finance this radical shift. But in Congress the alliance supporting Petro does not have a majority, and this will not be easy. “We propose tax reform that generates justice (…) Taxes will not be confiscatory, they will simply be fair, in a country that must recognise the enormous social inequality we live in as an aberration.”

A choice may loom in the future between implementing social reforms and green conversion. The dilemma is very real and topical. The United Nations Development Programme (UNDP) had just announced a partnership in the Colombian Amazon between the UN agency and GeoPark, the multinational oil company. The company has contracts to drill near the Siona reserve, including one with the government that would expand operations in what the Siona consider their ancestral land. A $1.9 million regional aid package. In a village with no running water, intermittent electricity and persistent poverty, any amount would have meant food and opportunity. But for the Siona of the Buenavista reserve, oil drilling is an assault, like draining the blood from the earth. For the New York Times, ‘this collaboration is an example of how one of the world’s largest sustainable development organisations works with polluters’.

Petro has shown pragmatism by including in key positions politicians who do not come from the left and who have good relations with legislators from other sectors. Since the election campaign he has approached Roy Barreras, an astute politician who has been on the right, the centre and now the left, and who is the president of Congress until July 2023. And he appointed Alfonso Prada, who has had a career in the Liberal and Green parties, as Minister of the Interior, responsible for political relations. Both were important in the management of legislative majorities in the government of Juan Manuel Santos, and they bring this experience to the new executive to meet the challenge.

The Duque government maintained a multi-million dollar fuel subsidy during its term. With annual inflation above 10% and a significant fiscal deficit, the government is faced with the dilemma of whether to maintain the subsidy reduction policy left by Duque, with the risk of increasing pressure on inflation and producing discontent, or to keep the subsidies and increase the state deficit. And the question remains as to how the business class, which has never had to deal with a left-wing government that now promises to radically change the country’s economic structure, will behave.