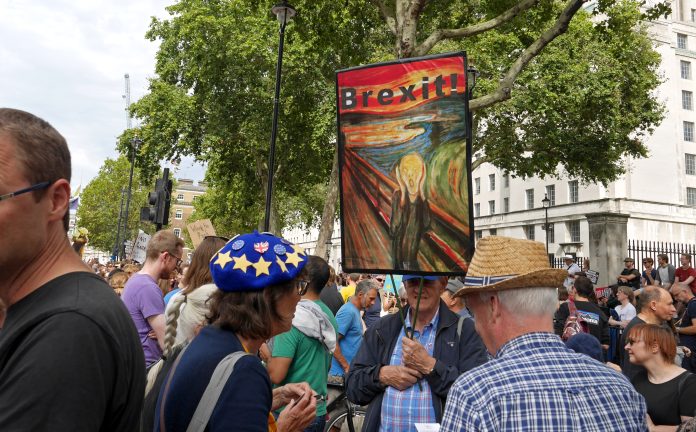 In the island of Ireland, paramilitary groups had abandoned their weapons in 1998 only because they were satisfied with the conditions contained in the Belfast Agreement.  Also known as the Good Friday Agreement, the treaty was a political deal designed to bring an end to 30 years of violent conflict in Northern Ireland, known as the Troubles. It was signed on 10 April 1998 and approved by public votes in Northern Ireland and the Republic of Ireland.

The Good Friday Agreement has dampened sectarian tensions and brought stability to Northern Ireland, but those conditions are now called into question by the EU withdrawal agreement, the Brexit, which with its novel trade and border arrangements, has threatened the delicate balance and sparked worries over renewed conflict.

In fact, violent groups have actually never definitively stopped making themselves heard in the country.

Protesters continue to express their anger against the government that betrayed them by approving, in the treaty that marks the completion of Brexit and in force from early 2021, the “Northern Ireland Protocol.”

The demonstrators are mainly the Loyalists, i.e., the faction loyal to the Queen (until recently and now to the King) and supporting Northern Ireland’s membership in the British Kingdom, who in disagreement with the protocol had withdrawn their support for the 1998 Peace Agreement in March 2021.

Johnson’s party made a boast of the Brexit treaty without ever taking full responsibility for it.  Brexit has brought everyone’s discontents to the surface, but the rapid recurrence of violence shows that integration, the ability to organize meeting points and common values, has been lacking.

Northern Ireland continues to struggle and split between its two disgruntled souls. This is why the European Commission has started “PEACE PLUS”, a new cross-border EU programme to strengthen peace and reconciliation and cross-border cooperation between Ireland and Northern Ireland. It combines the previous INTERREG and PEACE funding strands into a new programme for the 2021-2027 EU period.

The Commission will invest €235 million from the European Territorial Cooperation allocation of the European Regional Development Fund. Together with the UK’s financial commitment and additional national co-financing from Ireland and Northern Ireland, this will result in a total investment of €1.1 billion in peace and prosperity on the island of Ireland.

Commissioner for Cohesion and Reforms, Elisa Ferreira, said: “Since 1995, the EU has been committed to make a constructive contribution to the peace process. The new ambitious PEACE PLUS, the largest ever cross-border cooperation programme in the island, is built on the same principles of partnership that have made the past PEACE programmes effective instruments for cooperation and peace building. We invite partners in Ireland and Northern Ireland to continue their work to achieve our shared ambitions for reconciliation, peace and prosperity.”

The programme will target investment in six key thematic areas:

We will further observe a special focus on economic regeneration and transformation, skills development and biodiversity, which used to be funded under the INTERREG Ireland – Northern Ireland – Scotland programme, and have now been integrated in the PEACE PLUS programme to complement the investments in peace and reconciliation. These will help growing the potential of local small and medium businesses and drive the promotion and adoption of new technologies through research and innovation. The funds will also address key skills gaps, which will result in increased productivity and employment and higher levels of cross border labour mobility.

The EU and the UK have expressed their commitment in the EU-UK Withdrawal Agreement to continue the programme within the 2021-2027 Multi-annual Financial Framework.