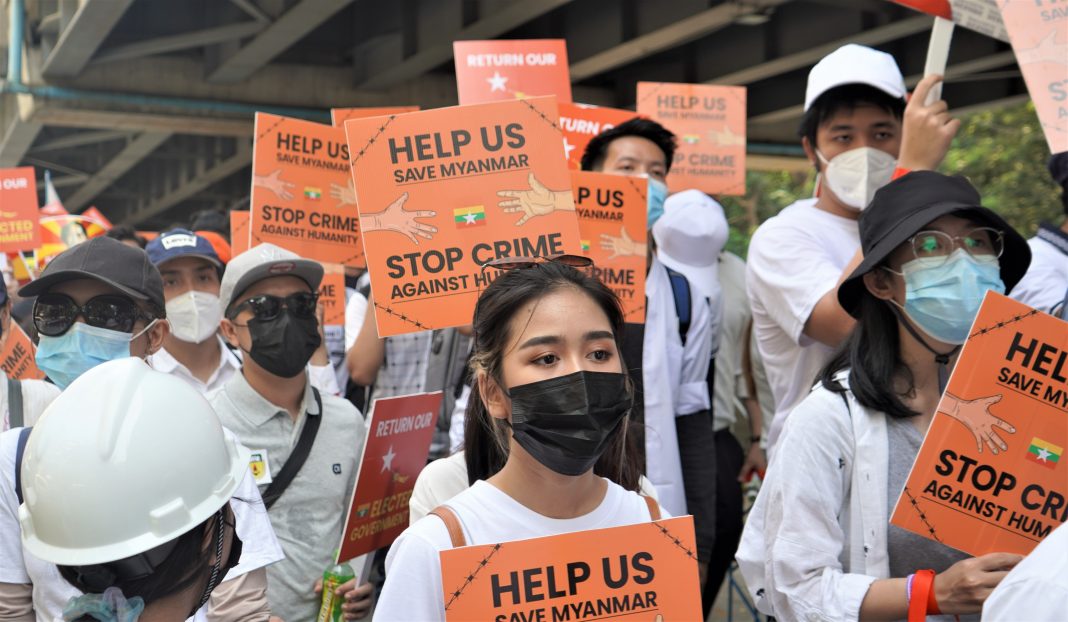 If anyone had thought that there could, as the UN and the outside world advocate, be a dialogue between Myanmar’s junta and the democratic opposition, those hopes were effectively dashed when the country’s military leader, Senior General Min Aung Hlaing, gave a fiery speech on Armed Forces Day, March 27.

On the occasion, the coup leader vowed to “annihilate to the end” want he described as “terrorist groups” and also “urged” Myanmar’s many ethnic armed organizations not to support those “terrorist groups” and, instead, “live within a legal framework” (sic), which analysts interpret as sticking to a now-collapsed National Ceasefire Agreement that the military concluded with a limited number of ethnic rebel armies in 2015.
Equally important was the show of unity the armed forces displayed on March 27, dispelling all persistent but misguided notions of “power struggles” between hardliners in the military and “reformists” supposedly represented by Thein Sein, who served as president from 2011 to 2016. No less than 25 former officers who have served in various military-appointed governments since the bloody crackdown on a pro-democracy uprising in 1988 were at the parade and other functions at the capital Naypyidaw. Among them was Thein Sein, who reportedly gave “words of advice” to Min Aung Hlaing who, in return, bowed in a show of respect to the ex-president.

It was not the first time Thein Sein had shown his true colors. In December last year, the ex-general once dubbed “Myanmar’s Gorbachev” by some Western observers for his supposedly “reformist agenda”, made donations to families of people who had been killed or wounded on suspicion of acting as military informants. Needless to say, Thein Sein has never donated any money to the many families whose loved ones have been gunned down by the military and the police for demonstrating peacefully against last year’s coup.

According to the independent advocacy group the Assistance Association for Political Prisoners, 1,723 unarmed protesters have been killed or tortured to death in various detention centers since the coup. More than 13,000 people, including activists, local politicians, journalists and health workers who supported the anti-junta movement have been jailed. Those figures do not include the thousands of villagers who have been killed in airstrikes and artillery bombardment in ethnic areas, where resistance to the coup has grown strong over the past year. According to an announcement by the United Nations High Commissioner for Refugees on February 11, the number of Internally displaced people (IDPs) in Myanmar has doubled since last year’s coup, now crossing the 800,000-mark.

While the world’s attention is now almost entirely focused on Russia’s invasion of Ukraine, another massive tragedy is playing out in Myanmar, and very little is being done about it by the international community.

Foreign powers, among them the European Union, in a statement in October last year appear to have outsourced the Myanmar issue to ASEAN: “The European Union calls on Myanmar to engage constructively with the ASEAN Special Envoy to implement fully and completely the ASEAN Five Point Consensus. It stresses the need for the military to facilitate regular visits to Myanmar by the ASEAN Special Envoy, and for him to be able to engage freely with all he wishes to meet.”

The “five-point consensus”, which was adopted when Min Aung Hlaing paid a brief visit to Jakarta on April 24 last year, called for a cessation of violence and “a constructive dialog between all parties concerned.” The EU statement was remarkable in the sense that the “Five Point Agreement” was already dead when the Europeans issued it. No envoys from ASEAN have been allowed to meet anybody except junta officials and the word “dialog” has never been uttered by Min Aung Hlaing and his cohorts.

During the most recent such ASEAN visit, by Cambodia’s Deputy Prime Minister and Foreign Minister Prak Sokhonn in late March, all that the junta had to offer him was a meeting with Su Su Lwin, the wife of Htin Kyaw, president from 2016-2018 and a member of the coup-ousted National League for Democracy (NLD). Su Su Lwin, however, declined to meet the ASEAN envoy, citing “health issues.” But that did not prevent Noeleen Hayzer, UN Secretary-General’s special envoy to Myanmar, from teaming up with not only Prak Sokonn but also Cambodia’s authoritarian ruler Hun Sen, whose country is this year’s ASEAN rotational chair.

On April 1 — and it was apparently not an April Fool’s joke — Hayzer’s office issued a statement referring to the “robust ASEAN-UN umbrella” and that “ASEAN and the broader international community have a responsibility to amplify and support the will of the people.”

Critics would say that she seems to have conveniently forgotten that ASEAN is a gathering of ten mostly undemocratic nations which has never during its now almost 55-year-long history helped solve a single problem in member states or bilateral disputes between them. Such issues range from the conflict in East Timor and border disputes between Cambodia and Thailand, Cambodia and Vietnam, Malaysia and the Philippines, cross-border insurgencies between Thailand and Malaysia, and, perhaps most crucially, a common stand on the South China Sea as China asserts its wide-reaching claims to the strategic waterway.

In fact, ASEAN’s two guiding principles — consensus and non-interference — make the bloc impotent when it comes to regional security or the promotion of peace and democracy. The only things that ASEAN can show as progress would be some trade agreements and visa exemption rules for citizens of member states.

Meanwhile, the Myanmar military is pushing ahead its brutal campaign to wipe out resistance forces and secure control over the country. Elections may or may not be held in 2023, as Mun Aung Hlaing once stated, but before that happens the military will make sure that the NLD is emasculated politically and organizationally. The NLD has scored massive landslide victories in all the elections it has contested, first in 1990 to for a National Assembly that was never convened but replaced by the military with a constitution-drafting body that consisted of no more than 100 of 492 MPs elects and then up to 600 delegates appointed by the military.

Then, in 2015 after which the NLD was allowed to form a government and, finally, in 2020, when the military seized power before the elected assembly could meet. The generals are now busy preparing for the selection of its own election commissioners while all NLD leaders, among them President Win Myint and State Counselor Aung San Suu Kyi, remain in military custody.

Since the tanks rolled into Yangon and Naypyidaw, and the protests were met with gunfire, thousands of activists have fled to the border areas where ethnic rebels have territories or organized their own resistance in parts of central Myanmar that have not seen insurgency since the 1970s. Those forces have shown remarkable resilience and fighting spirit, but the abundance of local resistance groups, loosely lumped together as People’s Defense Forces, do not appear to coordinate their activities under a central command. There are frequent ambushes and skirmishes in various parts of the country, but no coherent strategy seems to have been developed for the anti-junta struggle.
Nor do they currently have enough weaponry to seriously challenge the mighty firepower of the Myanmar military. At the same time, junta forces are stretched thin on many fronts, making it impossible for Min Aung Hlaing to “annihilate” the resistance, as he has pledged.

With the outside world now doing next to nothing, there can only be one conclusion: The Myanmar tragedy is bound to continue for the foreseeable future with more internal turmoil, refugee flows to neighboring countries and repression of any dissent under unflinching generals for whom notions of compromise, dialogue and listening to public opinion do not exist.

*Former correspondent with the Far Eastern Economic Review and the author of several books on Burma, North Korea, and organized crime in the Asia-Pacific. You can read more of his work on our partner website: