Home World Asia Gotaba’s on the run, Ranil to the Presidency 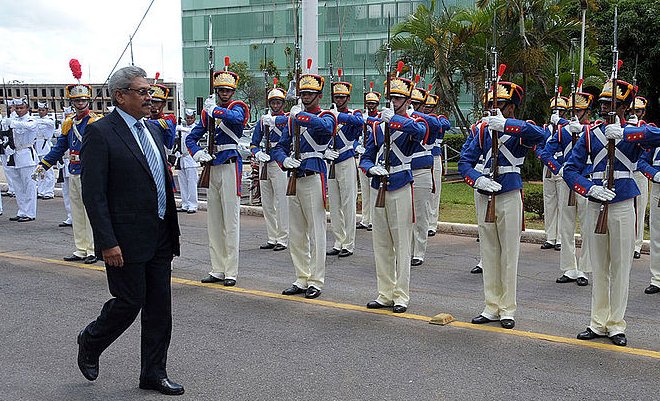 The official act came in the evening of July 13: the outgoing President has appointed Prime Minister Ranil Wickremesinghe as Interim President to exercise the powers, duties and functions of the Office of the President with effect from 13 July 2022. A due act on a very tense day and one that for now does not resolve the crisis into which Sri Lanka has plunged.

A sign of ever-increasing tension and as the first incidents between police and protesters near Parliament were recorded, one of the national heroes of the war against the Tamil Tigers, former army commander and Field Marshal Sarath Fonseka, appealed to the armed forces to refrain from implementing the instructions given by Prime Minister Ranil Wickremesinghe, who identifies himself as the interim president of Sri Lanka. Stating that rumours are circulating among anti-government protesters that firing orders have been issued, he said there is a risk of a clash between the three forces and the citizens of the country and urged the military to refrain from using their weapons against innocent and unarmed citizens and to use them instead against corrupt politicians.

Sri Lankan President Gotabaya Rajapaksa escaped: he flew out of the country in the early hours of this morning on a military plane of the Sri Lankan Air Force bound for the neighbouring Maldives, the AFP news agency reported, citing local officials. The 73-year-old leader, his wife and a bodyguard were among four passengers on board an Antonov-32 plane that took off from the country’s main international airport. The Indian embassy categorically denied ‘baseless and speculative’ media reports that India facilitated the travel of President Gotabaya Rajapaksa and his brother Basil Rajapaksa out of Sri Lanka. His final destination would be Singapore also because in the Maldives he was protested by Sri Lankans living in the archipelago to the extent that the police intervened.

Gotabaya Rajapaksa was due to resign on Wednesday, as the Speaker of Parliament said he should receive a letter from him containing his resignation. Ranil Wikremeshinghe meanwhile, as the passage dictated by the Constitution theoretically dictates, would already be temporary President and as such imposed the curfew and state of emergency immediately declared illegal; anti-government protesters meanwhile entered the Prime Minister’s office premises on Flower Road in the early afternoon. The Prime Minister now President (but the transition is confusing) should pave the way for the government of national unity that, with all parties represented, should lead the country out of the institutional crisis and restart negotiations with the Monetary Fund. But the protesters do not trust it. On Tuesday, Al Jazeera published a document from the movement that sketches a ‘Sudanese’ scenario: it is a document released on 5 July with an action plan consisting of six fundamental demands.

Among these, besides the resignation of the leadership, is the formation of a ‘Janatha Aragalaya’ (People’s Struggle) People’s Council to control the political transition. Basically, the square fears that a government of national unity would still give a chance to the Rajapaksa party, the Sri Lanka Podujana Peramuna (Sri Lanka People’s Front). led by Mahinda Rajapaksa, Gotabaya’s brother and former prime minister who resigned on 9 May in the wake of the mounting protest.

On the cover, Gotabaya during a parade received with full honours in Brazil