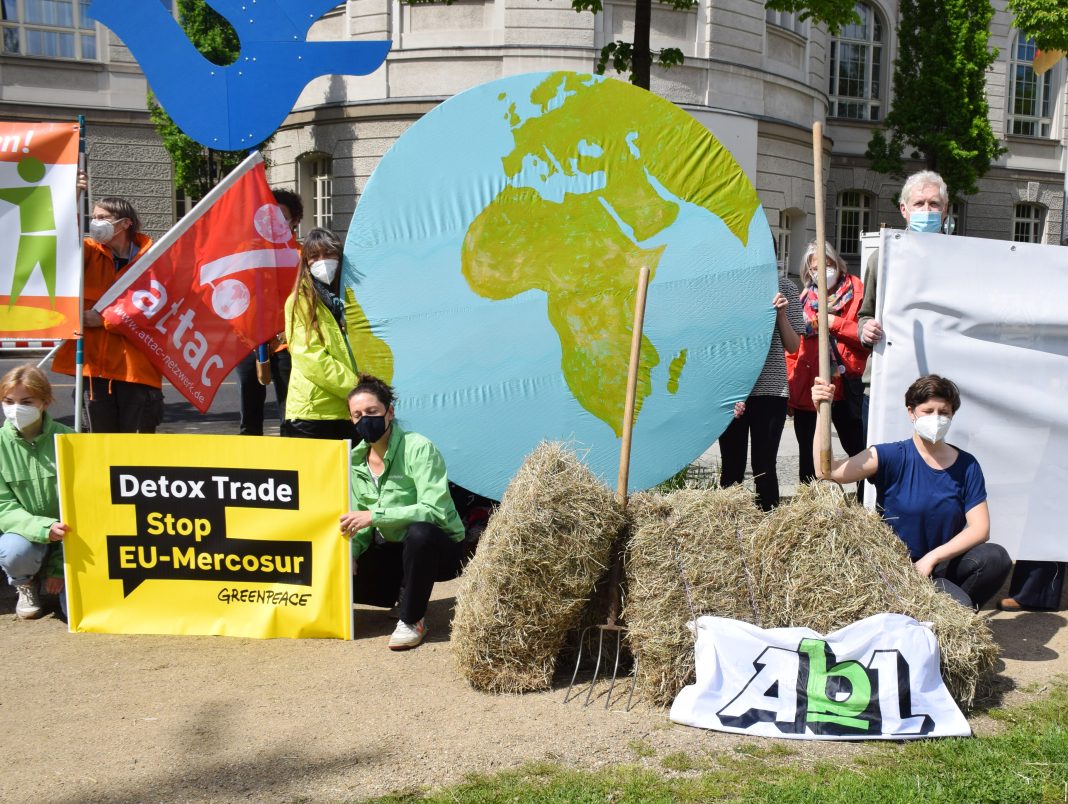 The aspiration of inter-regionalism is to ease access for companies to regulated markets by giving them more legal protection, better geographical access and lower investment costs. However, integration projects and a strategic association between the European Union and the Southern Common Market (MERCOSUR) have fallen short of success. This has resulted in EU-Latin America free trade agreements that are exacerbating many of the environmental, social, economic and political crises in the world’s food basket.

Exports from Latin America to Europe rely heavily on resource-intensive commodities, such as soy, wood pulp, minerals, petroleum oils, beef and poultry. Prior to the regional EU-MERCOSUR Free Trade Agreement, 268,988 tons of meat were exported to the European Union by MERCOSUR countries (Uruguay, Paraguay, Brazil and Argentina) by 2018. Some of the meat exported from these countries is directly linked to deforestation. In January 2022, deforestation in the Brazilian rainforest reached an all-time high, while nutrition insecurity and loss of livelihoods put thousands of people at risk. The EU, the aforementioned countries and its trade policies, unfortunately, play a part in this tragic development.

Addressing deforestation in the Amazon as a numbers-based problem (Co2 tons, hectares with a specific number of trees) could risk providing a rationale for the relocation of industrial farms to other parts of the world. This would, however, fail to include the numerous ramifications of industrialized livestock and soy (mainly used for livestock feed) on environmental protection, human rights, biodiversity and food sovereignty. The effects of livestock and industrialized agricultural expansion are already felt worldwide, especially in Latin American countries. With an increasing global demand for cheap meat, this trend is expected to worsen, and severely impact other regions such as Africa.

Local communities often fall victim to the industrialized food systems model. This approach is based on achieving competitive prices to meet the demand for food in other countries. This practice continues despite local populations’ repeated demands for the diversification of food production, and greater support at the local level. The latest FAO-WFP report warned about acute food insecurity in Latin American countries like Colombia and Honduras. Several factors, including climate change and socio-economical aspects, could cause these countries to suffer severe food insecurity in the coming years. The Brazilian population is already suffering from food insecurity, despite being one of the biggest commodity producers in the world. According to the FAO, this situation will likely worsen in all of Latin America by 2030.

Negotiating trade relations as a bloc ignores socio-economic and environmental realities. For example, due diligence approaches such as the FERC (Forest and Ecosystem Risk Commodities) are appealing. However, such an approach could negatively impact ecosystems excluded from commodity production regulations. Furthermore, the real problem would not be addressed by leaving the burden of controlling deforestation on the companies alone; global consumption, its stimulation by trade agreements, and human rights violations would remain unsolved.

Land grabbing and lack of land titling remain a crucial problem in Latin America, along with the lack of binding agreements for businesses to avoid human rights violations. Supporting truly transformative actions that address, among other things, gender issues, are necessary. For example, agroecology conservation efforts are flouted in the case of the peasant women in Argentina and Chile. This is due to the absence of political backing for the protection of the people, while fiscal measures support industrial agriculture. The development and maintenance of traditional knowledge and community-led initiatives, where women usually play a crucial role, are essential, especially because many of them depend on traditional farming and agroecology.

A Just Livestock Transition could help facilitate a transformation by putting farmers and producers at the center of sustainable and fair food systems. As a powerful trade partner, the EU has the ability to prevent further intensification of agroindustries in Latin America through trade policies. A Just Livestock Transition will be of particular importance, as the import of industrialized beef and soy, the most resource-intensive commodities, are also driving up environmental destruction, increasing climate change and destroying the livelihoods of local farmers.

If small-scale producers, who have overwhelmingly maintained sustainable farming practices, are put front and center, it could help reverse years of damage, fight food insecurity and increase agroecological production for the benefit of local communities. Such changes would help advance the EU’s environmental and food policy ambitions, and be a major climate change mitigation measure. An in-depth analysis of Latin American policies is required to implement initiatives that provide real solutions to advance environmental protection and equity. Empowering women, peasants and Indigenous peoples to be social and political actors is paramount, and an essential part of achieving healthy food systems and food sovereignty in Latin America.

(*) – Lasse Bruun is an advocacy expert in climate, sustainable agriculture and food systems and serves as the CEO of 50by40, a collective impact food systems organization with 70+ partner organizations. — Milena Bernal Rubio is Global Forest Coalition’s livestock campaign coordinator.The views expressed in this article are the writers’ own.