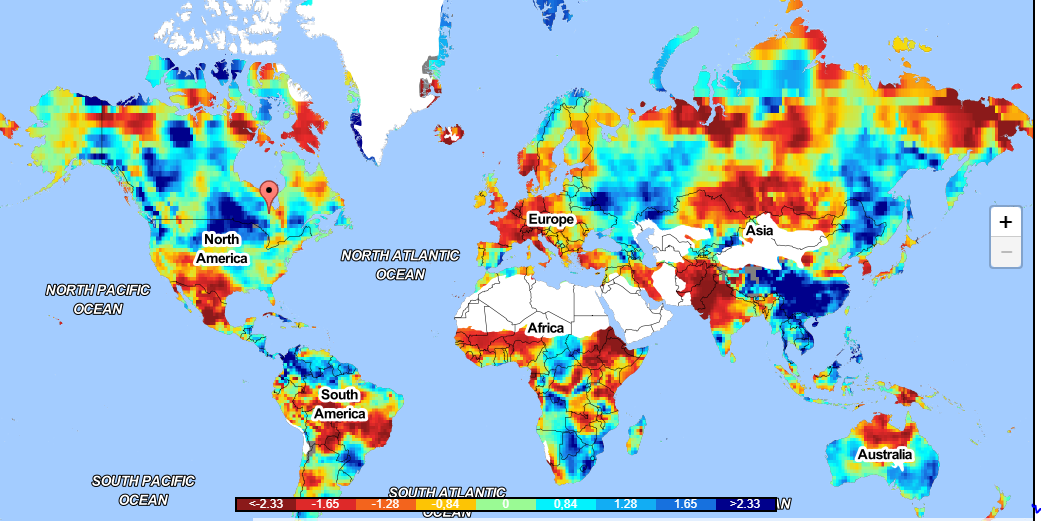 The cry is global. About 4 billion people (out of 7.8 billion human beings) now experience severe water shortages for at least one month a year. More and more people (around 700million) suffer longer periods of drought than seventy years ago, and the global population affected by extreme drought is set to increase from 3% to 8%.

Adding to this bleak picture are economic issues. Agriculture, for example, suffers enormously from the effects of drought. According to WWF findings, globally, between 1983 and 2009, about three quarters of global cropland (about 454 million hectares) suffered drought-induced yield losses, with cumulative production losses of USD 166 billion. Also the NGO, which on the occasion of World Desertification and Drought Day (17 June) published its own in-depth study, revealed that current global thermoelectric and hydroelectric production is also negatively affected by the phenomenon. We are talking here about a 4 to 5 per cent reduction in installation utilisation rates during drought years compared to long-term average values since the 1980s.

According to UNCCD’s latest Drought in Numbers report, the frequency and severity of droughts have increased by 29% since 2000. By 2050, drylands could cover between 50 and 60 per cent of the entire earth, with about three quarters of the world’s population living in these areas under severe water scarcity conditions.

*On the cover and below, two maps from UNCCD’s latest Drought in Numbers report

The SPEI Index and the SPEI Global Drought Monitor

Who does What: The UNCCD against desertification

FOCUS 1: Where Droughts hit the hardest

Despite the dramatic picture of drought and desertification in which the planet finds itself, according to the UNCCD some new drought risk mitigation measures are being developed by the UN Convention and the UN Food and Agriculture Organisation (FAO). These practices show that drought resilience can be increased, through ‘early warning, increased inter-agency cooperation and a mix of traditional knowledge and innovative approaches’.

Here are some examples. In Brazil, Ethiopia and Tunisia, a combination of water harvesting and sustainable land management practices is being used ‘to reduce the impact of drought among vulnerable populations’. There are also signs of progress in the most vulnerable regions, such as in the Sahel, where there is an institution that “brings together the full range of stakeholders, from producer associations to decision-makers, who benefit from the scientific and technological capacities provided by regional organisations.”

India, on the other hand, has adopted an approach described as ‘even more comprehensive’ that includes drought management as part of the national disaster management plan and involves various institutions at national, state and local levels: it is based on early action that starts with the management of the country’s water system, including rainwater, rivers and aquifers.

In Central America’s so-called Corredor Seco, which stretches across Guatemala, El Salvador, Honduras, Nicaragua and parts of Costa Rica and Panama, community emergency funds are used to support drought-stricken farmers without access to formal systems financing and insurance. More than 60 per cent of the population, according to the UN Convention, depends on the production of staple grains for their livelihoods, and in three out of five harvest cycles small farmers suffer significant losses.

The US has also developed ‘some of the most sophisticated and advanced drought monitoring and response mechanisms that could benefit and accelerate the development of collaborative action at the global level’.

The SPEI Index and the SPEI Global Drought Monitor

Objectively quantifying the characteristics of drought episodes in terms of intensity, magnitude, duration and extent and its effects is very difficult. Much effort has been devoted by the scientific community to the development of techniques for analysing and monitoring drought. Of these, the definition of quantitative indices is the most popular approach, but the subjectivity in the very definition of drought has made it very difficult to establish a single, universal index.

One such attempt is the SPEI (Standardised Precipitation-Evapotranspiration Index). This is an index based on climate data that can be used to determine the onset, duration and extent of drought conditions compared to normal conditions in a variety of natural and managed systems such as crops, ecosystems, rivers, water resources, etc. Linked to the index is the SPEI Global Drought Monitor, which provides near real-time information on drought conditions on a global scale, with a spatial resolution of 1 degree and a monthly temporal resolution.

WHO DOES WHAT: The UNCCD against Desertification

The United Nations Convention to Combat Desertification (UNCCD) is ‘an international agreement on good land management’. Established in 1994, the Convention is the only legally binding international agreement linking environment and development to sustainable land management. 197 countries and the European Union are Parties to the Convention. The Executive Secretary of the United Nations Convention to Combat Desertification is Ibrahim Thiaw. The body is based in Bonn, Germany.

Against droughts, UNCCD is responsible for establishing preparedness systems, such as national plans, working together at the regional level ‘to reduce the vulnerability and risk of drought’ and providing ‘a toolbox that stakeholders can use to increase the drought resilience of both people and ecosystems’. A central part of the Drought Initiative is the Drought Toolbox that countries can use to develop and strengthen their national drought plans. The Toolbox provides tools, case studies and other resources “to support the design of the National Drought Policy Plan with the goal of increasing the resilience of people and ecosystems to drought”. It is developed by Unccd, together with its partners, including the Food and Agriculture Organisation of the United Nations, the Global Water Partnership and the World Meteorological Organisation.

The latest awareness-raising campaign started with the 2022 Desertification and Drought Day. Titled ‘Droughtland‘, it is a public awareness campaign featuring an imaginary drought-stricken nation.

FOCUS 1: Where droughts hit the hardest

According to UNCCD’s ‘Drought in numbers’ report, extreme drought affects Africa more than any other continent. With more than 300 events recorded in the last 100 years, it accounts for 44% of the global total. In the last century, however, the greatest number of people affected by drought has occurred in Asia with over 1.4 billion people affected by drought in the period from 2000 to 2019. The effect of severe drought is estimated to have reduced India’s gross domestic product by 2 to 5 per cent from 1998 to 2017.

The drought and the consequent need to collect water affects the female population to a greater extent. This work falls disproportionately on women (72%) and girls (9%), who, in some cases, spend up to 40% of their calorie intake carrying water.

The World Bank estimates that up to 216 million people could be forced to migrate by 2050, largely due to drought, along with other factors such as water scarcity, declining crop productivity, rising sea levels and overpopulation. By 2050, between 4.8 and 5.7 billion people will live in areas with water scarcity for at least one month, up from 3.6 billion today.

If global warming reaches 3 degrees Celsius by 2100, drought losses could be five times higher than today, with the largest increase expected in the Mediterranean and Atlantic regions of Europe. In the European Union and the United Kingdom, annual drought losses are currently estimated at around EUR 9bn and are projected to exceed EUR 65bn if no significant climate action is taken.

The future impacts of climate change on various water-related sectors of the economy are also expected to reduce global gross domestic product, with greater losses expected in low- and middle-income countries. Drought and flood risks and social damage will increase as global warming increases.