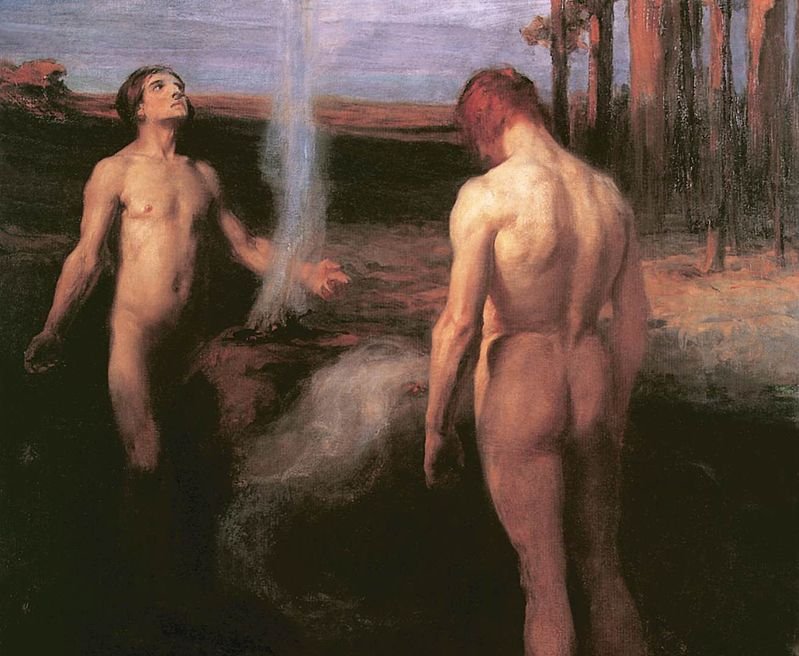 The editorial by our founder and director, Raffaele Crocco.

I am increasingly fascinated by the biblical rewriting of what is happening in Ukraine. I often hear ‘Cain killed Abel, and it is clear who is Cain in the affair between Russia and Ukraine’. I absolutely agree. Putin is Cain. He is the murderer who decided, in cold blood and according to his own personal calculation, to kill thousands of civilians. This indisputable fact should justify the fact of re-arming Abel-Ukraine, in the minds of those who cite this biblical episode often and insistingly. It is a pity that the very story – exactly as happens in war – clearly shows us that we would not have saved Abel by arming him, by giving him a weapon too. We would have saved him only by disarming Cain. And not just by taking away his weapon, but by disarming his intentions, by avoiding the situation, by creating greater justice, a better balance.

Hypothetical? Certainly, as hypothetical as it is to consider arming people as decisive for peace. Faced with the tragedy that unjustly affects the Ukrainian people, we can only act intelligently. We should reason, for example, on the paradox of the horror story, which the “partisan” souls that have arisen with the new phase of the war in Ukraine seem to have discovered. Let me make a premise, almost banal. War is always horror, there is no war that is not horror. Horror was in the siege of Sarajevo, in the massacre of Srebrenica, in the Shoah, in the Armenians massacred by the Turks, in Dresden bombed by the Allies, in the Nazi-fascist cruelty of Sant’Anna di Stazzema. War is blood, violence, and destruction. It is the stench of shit, horror, always and everywhere.

If this is true – and it is – a brief summary of the world news of these days may be useful: of the 160,681 civilians killed in 11 years of war in Syria, 49,359 have died under torture in Syrian government prisons, another 52,508 people have died under government artillery bombardment against areas controlled by anti-regime armed groups. These are mind-blowing numbers. I ask myself: the new partisans of the ‘purifying and liberation war’, why did they not call for the arming of those who tried to rebel against a cruel fascist regime? In what other game were they lost while this happened and was only witnessed by some. And again: where are the advocates today of “arming those who defend themselves in the name of freedom and the values of the Constitution” while the Kurds, whom we used as our personal cannon fodder against Isis, are being slaughtered daily by Turkish bombs?

Again: since 2014 in Yemen, the war has killed a total of at least 233,000 people, according to UN figures. Over 12,000 of these have been killed in targeted attacks, including 7,500 children. Many Yemeni cities have been destroyed by bombs. Bombs, let’s remember, dropped by Saudi Arabia and often sold by us. Here the attacked are the Yemenis, but we, that is our governments, all of them, even those supported by the neo-partisans of freedom, are doing business with Saudi Arabia.

Then there is a more interesting case to put to these new standard bearers of human rights. They claim that we must help the aggressed by arming them. Fine. But what happens when we are the aggressors? It happened in Afghanistan. It happened in Iraq. There the occupiers, the foreigners who imposed a political system, were us. True, the game is to justify the fact with the question that “we brought democracy”. That may be so, but we should tell that to the almost 72,000 civilians who died in twenty years of useless military occupation.

There is another element of the debate that I find impossible to understand, but so do the heralds of the ‘modern war of liberation’: the Syrians, the Afghans, the Iraqis, the Kurds, are part of that multitude of human beings fleeing wars who, every day, try to reach us. When some of them do make it, it takes years to obtain – when they do – refugee status, the international protection that they should all have as refugees fleeing war. The standard bearers of ‘arms to liberate peoples in the name of human rights’ have never blinked an eye at the long and inhuman time taken by European procedures, on the contrary.

They have supported governments that have made agreements with bandits and rais to create ‘containment camps’ across the border, for example in Libya or Turkey. In fact, we pay the jailers who have to stop them with public money. On the other hand, to the Ukrainian refugees, we have finally quickly granted refugee status, with the privileges that go with it. Right, nothing to say, but in fact we have created first-class and second-class refugees. Against this blatant violation of human rights, against this blatant injustice, no outraged voices or protests are raised.

For the sake of the Ukrainian people, for the future of those people whom we must save from the massacre, I hope that the champions of the ‘wars of liberation’ will lower their tones and at least begin to confront each other according to the rules of democracy and respect. I hope they realise that the solutions are complex and must always be based on rights, which are valid for everyone and always. I hope they understand that the hooligan spirit they use to insult the world of pacifism does not help to solve the tragedy of those who are under the bombs. Let us go back to discussing, to confronting each other. Let us go back to living in a democracy. If we don’t, what – apart from empty words and arrogant convictions – makes us different from those who support a dictator like Putin?