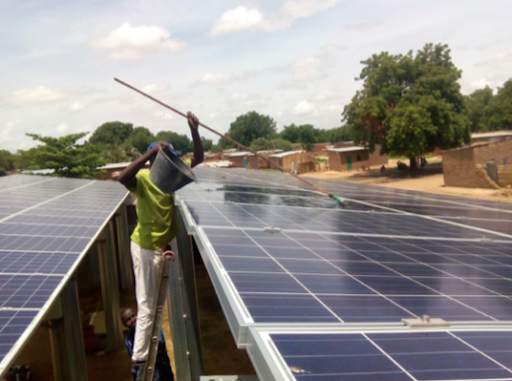 Chad is a country rich in oil and raw materials, but it is also rich in renewable energy (read our country file here). The country has in fact on average a level of solar irradiation between 2,000 and 2,800 kWh per square meter, and collects from 2,750 to 3,250 hours of sunshine per year, which makes this nation a true oasis for the development of solar energy.

Despite this richness, Chad records a low level of access to electricity compared to other states of the African continent: in 2016, only 8.83% of the population had access to electricity, according to the World Bank. However, the natural advantage of solar energy is beginning to be taken into serious consideration by both private and public actors.

The government has in fact decided to implement the “Solar Energy Project for Rural Development in Chad” programme, which began with the construction of a photovoltaic solar power installation in Kalam-kalam, near the administrative capital N’Djamena.
The project is led by the National Electricity Company (SNE), the Chadian national energy company and it is financed 87% from a loan from the Islamic Development Bank (IDB), 11% by the Chadian State through the SNE and 2% by the Kingdom of Morocco through the National Office for Electricity and water (Onee).

It is precisely in Kalam-kalam that the Minister of State, Minister Secretary General of the Presidency, Kalzeubé Payimi Deubet, laid the foundation stone for the construction of the photovoltaic solar power installation on 22 July 2020.

The installation will consist of interconnected solar panels and connected to multiple inverters. The energy generated by the park will be fed into a small grid via an upgrade station. The device will consist of two transformers that will allow the transport and distribution of electricity “without risk” on a 33 kV network, with a transmission line of 82 km.

The actual construction works of the plant started in January 2021. The electricity produced by the photovoltaic solar power plant is intended to provide reliable and affordable electricity to the people in rural areas of the country.

Once construction is complete, the electricity produced by the solar photovoltaic plant will benefit more than 8,400 families and 571 public service centers, which will be connected to the national electricity grid by the SNE.

This is only the first phase of the large solar and renewable energy development project conceived by the State of Chad: it will develop throughout the country and will end in 2030, costing over 13 billion CFA franc – the currency in use in Chad – which amounts to about 20 million euro.

The project aims to raise the rate of access to electricity in rural areas, going from 8% to 30%, it also aims to reduce the poverty rate and to create more than 10 thousand jobs opportunities throughout the whole country, bringing benefits to the entire population.

Nagorno Karabakh: holistic care for the elderly as the community’s pillars