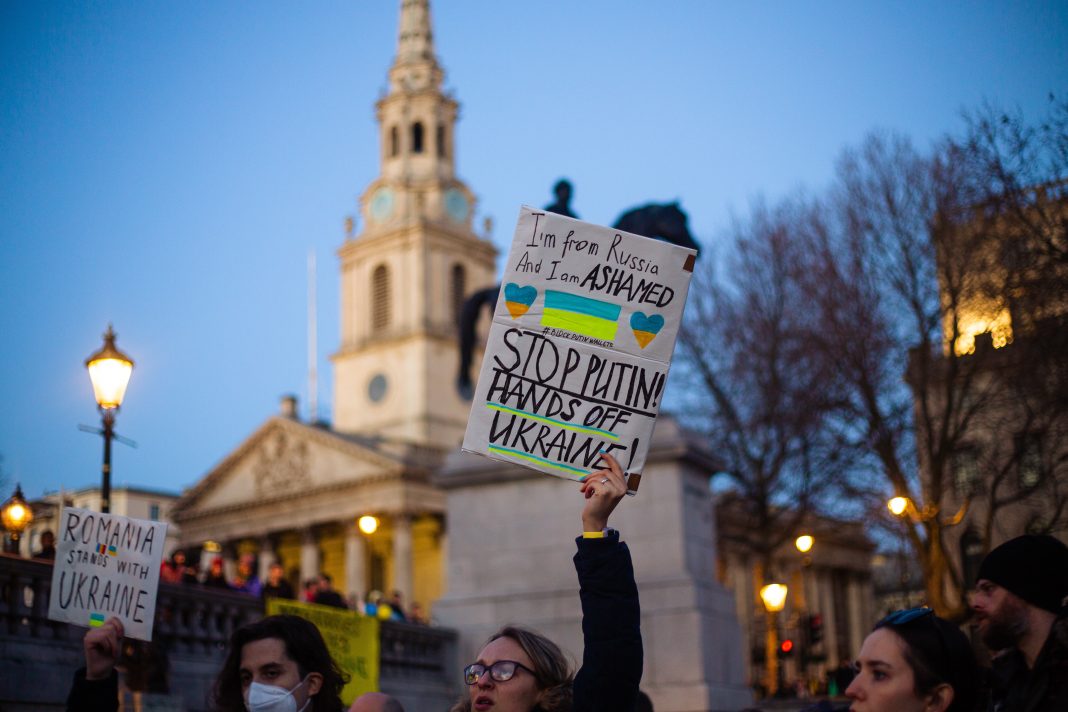 As thousands of antiwar Russians flee their country or remain trapped there due to devastating economic sanctions, President Vladimir Putin made a chilling video address to the Russian people on Thursday in an attempt to justify his disastrous war in Ukraine. He urged a “self-cleansing of society” to rid it of unpatriotic “scum and traitors.”

Putin is directing nationalist vitriol against an antiwar movement that has bravely defied state censorship and a violent police crackdown to protest the war in Ukraine. The autocrat appeared to conflate antiwar resistance with support for Russia’s perceived enemies in the West as he seeks to paint the conflict as a clash of civilizations that threatens Russia’s very existence.

Antiwar Russians come from all walks of life, but activists say many organizers and protesters are women, and now thousands of antiwar feminists, mothers, sisters, grandmothers and queer people across Russia are standing in the crosshairs of pro-Putin vigilantes and the Russian police state.

“They say antiwar protests, they have a woman’s face in Russia,” said Asya Maruket, a Russian antiwar and women’s rights activist during a Zoom call with fellow activists across central and Eastern Europe this week. In 2014, when war between Russia, Ukraine and Russian-backed separatists in Ukraine’s eastern Donbas regions first broke out, antiwar protests in Russia were also led by women, Maruket said.

Maruket, who, like many others, has fled Russia to speak freely about the war, presented a recent picture of a young woman holding a protest sign and being led away by police. The sign reads “peace to the world” in Russian. “This woman was arrested for the words, ‘peace to the world,’” Maruket said.

Putin’s government has effectively criminalized antiwar activism with a law that punishes Russians for statements that challenge the Russian military and the Kremlin’s narratives about the war, which it still calls a “special military operation” despite the escalating bloodshed and attacks on civilians. Activists who violate the law can face up to 15 years in prison for treason.

“The voices of antiwar activists are not heard, we cannot even say it is a war, because according to the new law, we can only name it as a ‘special operation,’” Maruket said.
Still, Maruket claims millions of Russians do not support the so-called “special operation” in Ukraine, and activists are getting “creative” to avoid punishment under the harsh dissent law.

Women have been leading silent pickets to avoid arrest and holding signs calling for peace instead of an end to “war.” Activists offer emotional, psychological and legal support to those who are detained by police, and organize “peace-building” actions for women in Ukraine by sharing contacts and linking activists and refugees from both countries. The distribution of leaflets, antiwar publications and reliable independent media challenge the Kremlin’s propaganda.

Maruket is a member of the Russian Feminist Antiwar Resistance, which she said has 20,000 participants and has organized initiatives and actions in 190 cities across the world. Maruket, who is a psychologist, stressed that the antiwar movement must be international, and all wars waged across the world — not just the war in Ukraine — are reason for global solidarity.

“Any war affects all of us and our psychological conditions, and threatens the health of our planet,” Maruket said. Russian activists, intellectuals and members of civil society are also helping each other evacuate the country to avoid repression and arrest, which Maruket said has become increasingly difficult due to crushing economic sanctions placed on Russia by the United States and its allies. The value of the ruble has tumbled, and people cannot easily access the money needed to flee. In Ukraine, more than 3.1 million people have fled the violence to neighboring countries, according to the United Nations.

“All these people said that they are refugees from their country too, because it’s not safe for them to stay in Russia,” explained Maruket. Internationally, the most famous challenge to the war and the anti-dissent law has come from Marina Ovsyannikova, a journalist who interrupted a news broadcast on a leading state-run television network this week with an antiwar sign warning Russians that they are being lied to about the conflict.

“Come out and protest. Don’t be afraid. They can’t jail us all,” Ovsyannikova said in a video statement recorded before her protest. Ovsyannikova was quickly arrested and interrogated for 14 hours before being fined $280 for inciting people to protest. However, Ovsyannikova continues to speak out, including to Western media outlets, putting her at risk of further prosecution.

As of Thursday, nearly 15,000 Russians had been detained or arrested for protesting the war, including lawyers, children and journalists, according to the Russian human rights watchdog OVD-Info. Many of those who’ve been arrested are women, including two women who recently leaked recordings of violent interrogations by police in Moscow to independent media outlets. OVD-Info reports that various criminal trials for antiwar activists continued this week, and several activists were fined, arrested or sentenced to compulsory labor.

Iva, a resident of Nizhny Novgorod, the sixth-largest city in Russia, told OVD-Info that a group of people arrested during an antiwar action on March 6 were jailed in a “special detention center” and “were forced to squat naked and were not allowed to sleep.” The group included eight women, Iva said. The next day the activists were taken to court and released from there. “We were cold and sleepy. They started and one by one, forced us to strip naked and squat,” Iva said in a translated statement, adding “what else can be expected from Russia?”

The Russian government has responded to antiwar protests and efforts to raise money for Ukrainians suffering under Putin’s invasion with “new repressions” and “tightening censorship,” according to OVD-Info. People who signed petitions against the war “faced dismissals or expulsions from universities, threats and other types of persecution for expressing their antiwar position.”

Most independent news outlets in Russia have stopped covering the war due to the anti-dissent law, activists say, and social media is censored, leaving millions of Russia reliant on state-run media.

Markut and other activists emphasize that the Russian people are not the Russian government, and anti-Russian sentiment, or Russophobia, in the United States and across Europe — exacerbated by the war — is also a problem for antiwar movements. Russian expats and refugees face judgement in other countries, and when people abroad assume that all Russians support Putin’s aggression, “it’s additional pain for us,” Maruket said.

“Millions of people who are not seen and not heard want to stop this war,” Maruket said. She claims that connections between Russians and the rest of the world is not a solution to the war. In fact, antiwar organizers from countries across the world are trying to do the opposite, creating new political formations to support antiwar protests in Russia as well as the people of Ukraine while demanding that all parties of the war — including Ukraine’s allies in the U.S., which is supplying the country with weapons — deescalate the conflict, end international sanctions and negotiate an immediate ceasefire.

Read more from Mike Ludwig on our partner media:

*Mike Ludwig is a staff reporter at Truthout based in New Orleans. He is also the writer and host of “Climate Front Lines,” a podcast about the people, places and ecosystems on the front lines of the climate crisis.