Home World Near East Turkish advancements in Syria and Iraq 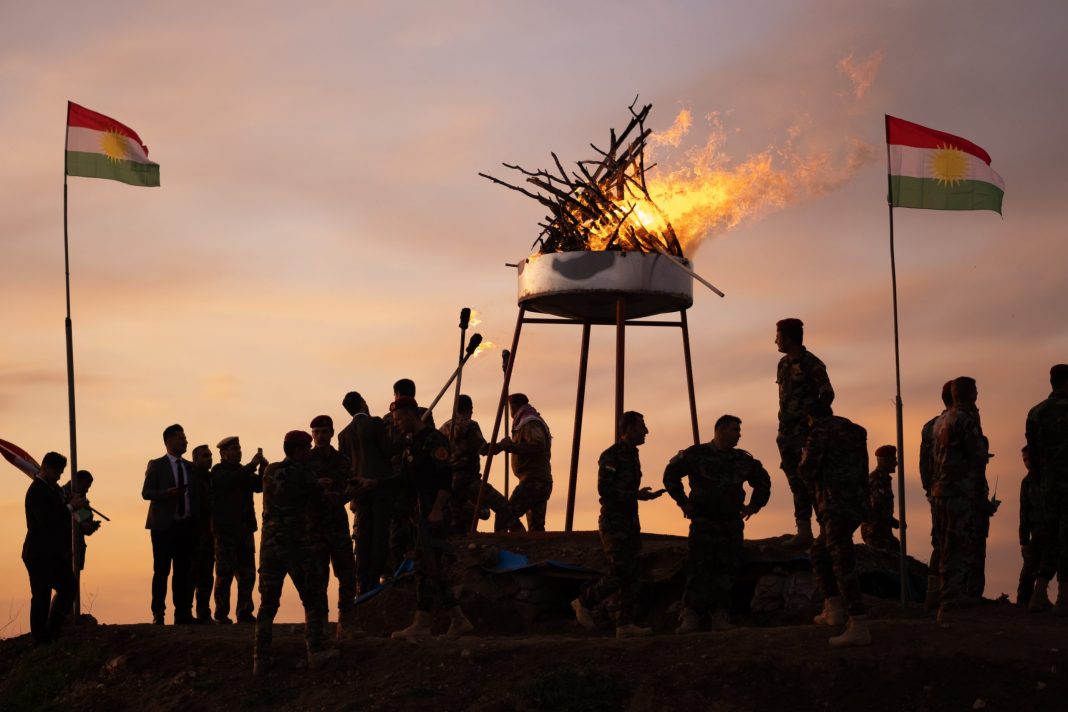 While carving out a space as a mediator in the conflict in Ukraine, Turkey is continuing its military moves to create a ‘security zone’ in Iraq and Syria.

The offensive against the Kurds

The Turkish military offensive in Iraq, against the Kurdish Workers’ Party in the mountains in the north of the country, has been going on since April 18. Turkish offensives in northern Iraq are frequent: in that area, the Kurdish party has its political and military base and stronghold of ideology and there are various examples of democratic confederalism: in the Makhmour camp, south of Erbil; north-eastern Syria; and Shengal, in north-western Iraq. The last ‘Winter Eagle’ attack on villages and a refugee camp was in February 2022. In addition to raids with jets and drones, in violation of Iraqi sovereignty, in recent days Turkey has attempted a ground invasion by special forces in the areas of Metina, Zap and Avasin-Basyan targeting shelters, ammunition depots, tunnel networks.

In a summit on 15 April, Recep Tayyip Erdogan and Iraqi Kurdistan Government (KRG) Prime Minister Masrour Barzani reaffirmed bilateral cooperation “to promote stability and security”. For many, this meeting is a clear signal that the KRG was in favour of the operation to some extent.

This is not how the Iraqi central government sees it, however, as they also strongly condemned Ankara’s operation and even summoned the Turkish ambassador. “Turkey,” said Foreign Ministry spokesman Ahmed al-Sahaf, “is carrying out continuous violations that have no basis in any legal basis or agreement between the two countries. They invoke Article 51 of the UN Charter for self-defence, but this cannot be implemented without Iraq’s official approval”. President of the Republic Salih, who is Kurdish as per the constitution, then reiterated that: “Unilateral practices to resolve security issues are unacceptable and Iraqi sovereignty must be respected. We refuse to be a land of conflict and an arena for solving other people’s wars’.

Iraq is still in the throes of a major political crisis. After the October 2021 elections, the parties failed to build a majority, the country is still ruled by an emergency administration. To make matters more precarious, there is also the armed group Hashd al-Shaabi (PMF), a pro-Iranian Shia force that has significant military influence in Iraq through its role in the fight against Isil and has now formed a political list called Fatah.

In recent days, attacks and tensions have also occurred in the district of Shengal, where the Azid community is experimenting with a form of autonomy inspired by Kurdish democratic confederalism. A position of the Asaysh (the internal defence forces of the Azid Autonomous Administration) was targeted, followed by a firefight, while for several days Turkish drones have been in action in the villages of the district.

The local administration,” explains Chiara Cruciati, journalist for Il Manifesto, who has just returned from Iraq, “is convinced that behind these attacks there is a desire to frighten those who have not yet returned. Of the 500,000 Ezidis present in Shengal before the Isis massacre in August 2014, only 250,000 remain because the others are in refugee camps in Iraqi Kurdistan or have been taken to Europe. Many would like to return here to celebrate the festival and there are many families who are thinking of returning to their homes. By stirring up tension, the governments of the region try to prevent this, making Shengal look like an unsafe place’.

The attacks on Shengal, according to the autonomous authorities, were not ordered by Baghdad but by military units stationed in Mosul that are in fact linked to the KDP, the party of the Barzani clan, leader of Iraqi Kurdistan. A further sign of the political fragmentation of Iraq.

The impression”, concludes Chiara Cruciati, “is that for the autonomies, both Kurdish and Azid, a lot will change depending on who will eventually manage to govern Iraq. In Shengal the request is to be able to be autonomous and manage their own security force, within the Iraqi state. The question is whether those who will govern will be willing to accept this or whether the attacks will intensify to the point of destroying autonomy’.

Turkey’s new military operation against Kurdish militants in northern Iraq, underway since 18 April, has sparked debate in the Iraqi parliament over a secret agreement that would allow Turkish troops to advance 30 kilometres into Iraq. The growing number and permanence of Turkish bases has fuelled political disputes in Baghdad. In a parliamentary debate on 24 April, First Deputy Speaker of the Iraqi parliament Hakim al-Zamili urged the foreign minister to explain what measures Iraq had taken against the attacks and clarify claims of an agreement that would allow Turkish forces to advance into Iraq. A spokesman for the Iraqi foreign ministry denied the existence of a secret agreement.

In Syria, on the other hand, while Operations Eufrates Shield and Olive Branch targeted areas west of the Euphrates, Al Monitor reported that Operation Peace Spring (2019) had sought to extend the Turkish-controlled border strip to the Iraqi border. The recent increase in Turkish attacks against the Kurdish-led Syrian Democratic Forces, taking advantage of Russia’s concern over Ukraine, would show that Ankara is intent on implementing its “safe zone” plan.

Since the Russian invasion of Ukraine, Turkey has in fact closed its airspace to Russian flights to Syria in what could be a move to increase pressure on Damascus and get the green light from Russia to strengthen the Turkish advance in Syria as well.