The first round of the French Presidential elections concluded on Sunday 10th April with the announcement of a run-off between current President Emmanuel Macron and far-right opponent Marine Le Pen. The face-off is now postponed to April 24th, when the country will be called to the urns again: opposing the centrist President, in power since 2017 and already recipient of 28.2% votes on Sunday, is the face of anti-EU, right-wing France: Marine Le Pen, who won a surprising 22.9% in the first round and is already gathering support among other conservative candidates such as Zemmour (Reconqête!) and Pécresse (Rèpublicains).

Three observations and a warning.

Nevertheless, the results of this first round of consultations are important – regardless of the outcome that will materialize in two weeks – for at least three reasons. First, because they are symptomatic of a larger change in the French electoral system; second, for the direction that the country is taking, away from peaceful multiculturalism and deep down in the spiral of rearmament. And, finally, because they remind us that the populist far right is strong in the heart of Europe and that the “sanitary cordon” keeping extremist currents from leadership positions (cordonne sanitaire) might not resist forever.

First note on the margin of what has been a crucial electoral campaign is the effect that this has had on the French political system: party lines, political manifestos and ideological commitments are disappearing in the background while the limelight shines solely on the candidate figures and their charm. The system seems to be steering towards the American Presidential system, where all that matters is the “strong man” or “strong woman” onstage, while the party manifestos swing accordingly to what the leader says to gain consensus. Populism and leadership dependence are not entirely new to French politics – Macron’s 2016 political program had been accused of being generalist and promising “everything and its opposite at the same time”, in order to win consensus from large sectors of the electorate with vague programmatic points.

Secondly, it is clear that France’s hopes for a culture of Peace are getting slimmer. On one hand, Macron’s condemnation of Russia’s invasion of Ukraine have been riddled with plans for rearmament and military support to Zelensky’s country. The militarization of a country already spending 2% of its GDP in weapons (50 billion euros, almost 59 billion US$) in preparation of a “high-intensity war” is not promising for the French pacifists, considering Macron presents himself as the moderate option.

On the other hand is Le Pen, whose electoral programme glosses over hints of war or  comments on Ukraine. Le Pen, who in the past had boasted about her support for Putin and called for a French pact with Moscow as an alternative to the EU, has steered her voters’ attention on internal national security, but she was repeatedly called out by her opponents on the left: a French President so compromised with Putin, who is showing his true authoritarian colours on European soil, would damage the image of France regionally and in the world. Meanwhile, Le Pen’s party is currently repaying a hefty loan of 9 million euros she received from Russia. But, however quiet on the Ukranian crisis, Le Pen remains extremely vocal on her xenophobic, islamophobic and overall racist views. Her program to curb immigration, embedded on racist assumptions, and her plans for more community policing (including a ban on hijabs and headscarves) have gained her an extensive following. Pressed among militarization and blatant racism, the French pacifist culture seems to have no room left on the political scene.

And finally, what we should not overlook is that the politics of fear and anger are still motivating one third of French citizens – a number that could increase before April 24th. Among Le Pen and other candidate Zemmour (who was eliminated with 7% of the votes), the xenophobic right charmed 30% of the French by leveraging on their discontent – a strategy that never seems to fail and that allows the right-wing leaders to profit off poverty and precarious life conditions. One of the founding European Member States is now considering electing a President who previously suggested leaving the Union, watching its collapse, and rebuilding from a Paris-Berlin-Moscow axis under Putin’s wise guidance. While learning from her mistakes and invoking now “not leaving, but subjecting EU law to French legislation”, Le Pen’s message is still extremely hostile to Brussels and to its institutions. In calling for a resurgence of French grandeur, the leader of the Rassemblement National inflames the hearts of nationalists with her rallies in which she promises to “put France first” again.

The French citizens are angry at the government for the cost-of-living crisis, partly dictated by the harsh sanctions on Russian gas. They are witnessing the downfall of the French capitalist model, and able populists such as Le Pen (widely regarded as the leader of the whole European far-right) have constantly and relentlessy redirected their worries into fury towards the EU, NATO and the “government of the rich” – as Macron’s leadership was addressed during the campaign. Hate, anger, and the easy temptation of “othering” weaker categories (such as immigrants and ethnic minorities) still prove to work in an electoral campaign where everything is valid. We don’t seem to learn from our mistakes, and still fall into the trap of those who channel the people’s disillusionment for their political gain.

This leads to the final warning, published this morning by The Economist’s electoral office: Le Pen appears to have now the same probability of winning the presidency that fellow populist Donald Trump had in 2016.  While the legitimacy of Trump’s election remains contested, and every country’s history is different, the tactics and rhetoric of the two right-wing blonds seem to echo each other. Will what worked for Donald Trump work for Marine Le Pen, or will the “cordonne sanitaire” work once more? 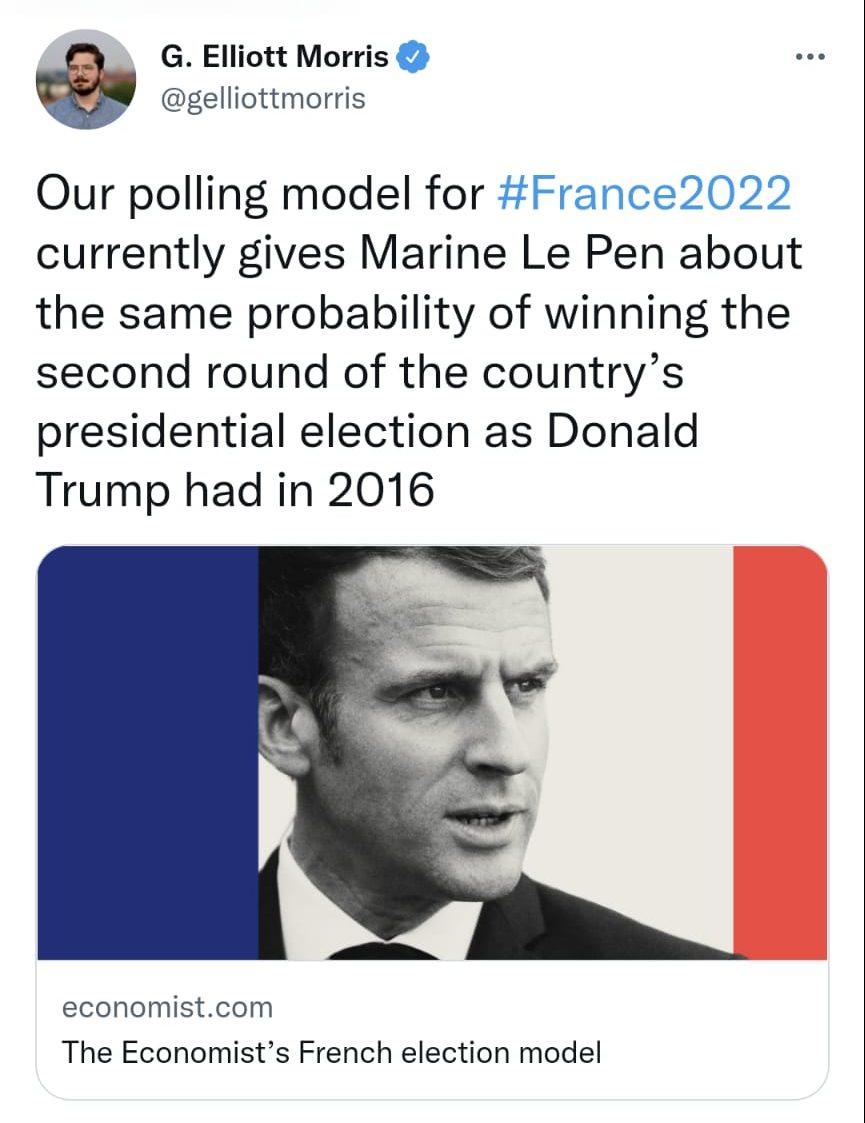 For now, the European neighbours and the world carefully watch and wait for the French citizens to decide their fate: as the second-largest European economy, a key security actor in central Africa and an influent player in the most important multilateral forums, France and its leadership are under no ordinary scrutiny. After all, France retains a seat in the leadership of NATO, the EU (of which it is currently holding the Council Presidency), G8 and the UN Security Council – where it can exercise its veto power alongside other four global powers. With a solid colonial past, and aspirations to be a security actor in MENA and further, France still sits at the centre of international diplomacy. For these reasons, the views and alignment of its future Presidency are relevant far beyond the national borders.