Home Dossiers The global military spending is on the rise 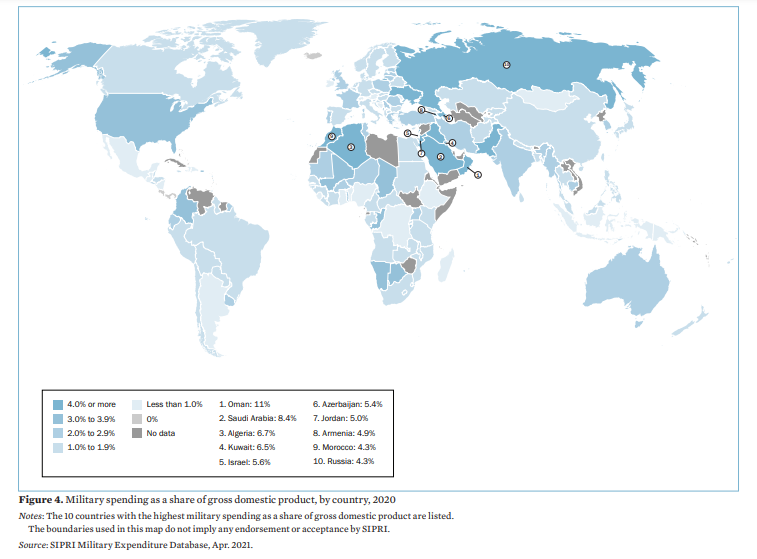 In the first year of the Covid19 pandemic, the world’s military spending increased by 2.6%. Weaponry investment as a percentage of the global GDP (which, due to diffused lockdowns and restrictions, have decreased by 3%) reached a global average of 2.4% in 2020, compared to 2.2% in 2019. This represents the largest increase in military load since the financial and economic crisis of 2009.

A complete picture is provided by Sipri, in the new dossier published on 26 April. The Stockholm International Peace Research Institute monitors all developments in military spending around the world, and has the most comprehensive, consistent and extensive publicly available data on military spending.

Regional trends – Africa and the Near East

Regional Trends - Africa and the Near East

The world’s military spending is densely concentrated in two continents: in 2020, the Americas (43%) and the Asia-Pacific region (27%) together accounted for more than two thirds of the global total. Third is Europe, which accounted for 19% of world military spending in 2020. The Near East (based on the limited data available for this region) contributed around 9% of the world total in 2020. Africa is trailing behind, with 2.2% of global military spending.

Military spending in the Americas was $ 853 billion in 2020 (3.9% more than in 2019, but 8.4% less than in 2011). Three countries of the Region have landed in the top 15: the United States (permanently in first place), Canada (thirteenth) and Brazil (fifteenth). South America’s share of the regional total fell from 6.3% in 2019 to 5.1% in 2020, while that of Central America and the Caribbean remained almost unchanged, at around 1%. The decline in spending in South America is mainly due to the 3.1% decline in Brazil, whose military spending appears to have been affected by the harsh impact of Covid19.

China, the world’s second largest buyer in military equipment in 2020, represents 13% of the global total (+ 1.9% compared to 2019, with 1.7% of the global GDP). Chinese military spending has increased for 26 consecutive years. In third place we find India, with its 72.9 billion dollars (2.1% more than the previous year and 34% higher than in 2011). This increase can be largely attributed to the ongoing conflict with Pakistan over Kashmir and renewed border tensions with China, as well as India’s more general rivalry with China as the main regional power in Asia and Oceania.

The military spending of six NATO members in the top 15 (United States, United Kingdom, Germany, France, Italy and Canada) amounted to 1103 billion in 2020. Six countries in the top 15 military are NATO members. With $ 995 billion, these six countries accounted for 90% of the Atlantic Alliance’s total and 50% of global military spending. Almost all members of the Alliance saw their military load increase in 2020. Twelve NATO members spent 2% or more of their GDP on the military, as required by the Pact. For example, France – the eighth largest investor globally – crossed the 2% mark for the first time since 2009.

Although most countries experienced a decline in gross domestic product in the first year of the Covid-19 pandemic, military spending has increased. However, SIPRI notes that the general impact of the pandemic on military spending cannot yet be definitively measured and will only become evident in the coming years.

The pandemic has in fact highlighted an important issue regarding the use and interpretation of data on military spending, namely the difference between planned and actual expenditure. Indeed, military spending data is generally available in three forms: the initial budget, a revised budget, and actual spending.