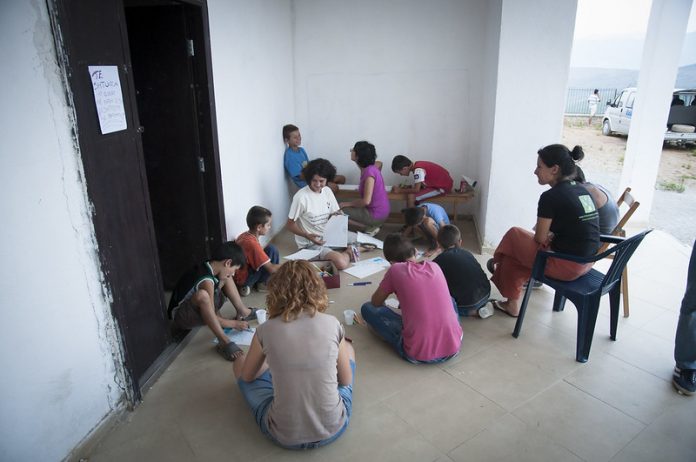 An article by Rebecca Bonechi

Operazione Colomba is the Nonviolent Peace Corps established by the Italian Association Comunità Papa Giovanni XXIII, which since September 2013 is present alongside the Syrian refugees in the camp of Tel Abbas in Lebanon, volunteers live in tents inside the camp.The NGO’s presence in the Syrian refugee camps is on three levels:

Firstly, they are involved in the daily life at the Tel Abbas camp: a constant presence in accompanying people to the hospital for operations and medical examinations, since the presence of volunteers will discourage their stop at check points (refugees cannot move freely within the country because Lebanon has not signed the UN Convention on the Rights of Refugees).

Secondly, Operazione Colomba (“Operation Dove”, from the Italian language) in cooperation with the Community of Sant’Egidio, the Waldensian Diaconia and the Italian Federation of Evangelical and Protestant Churches, the departure of refugees with the Humanitarian Corridors to Italy, France and Belgium.

The third level is the support and dissemination of the Peace Proposal, elaborated and supported by refugees: it is the attempt to give political space and voice to civil society that claims a role in the future of its country, the reconstruction of a just and non-violence Syria. Through meetings with institutional representatives, this proposal came to Rome at the Italian Parliament, in France at the Ministry of Foreign Affairs, in Brussels at the European Commission, and at the German Government.

They call for the return to Syria in safe humanitarian zones. The peace proposal insists on the application of Articles 14 and 15 of the Geneva Convention for the Protection of Civilians in Times of War, which declaring the right to establish safe and neutral zones for the protection of civilians. the Humanitarian Zone must be protected by the United Nations International Peace Forces and by international civilian and non-armed Peace Corps, with the total absence of the factions’ military forces, Syrian and international.

In addition, the work on the Peace Proposal also consists in the presence of a study and research centre on legal, social, demographic and political changes in the country, in collaboration with Italian and European universities, and in theoretical comparison of the proposal for peace with other non-violent paths and struggles.

The results of this constant effort are tangible: on the one hand, it led to an increase in the capacity of resilience and strengthening of the most vulnerable since the presence of volunteers proved to carve out margins of friendship, action and decision, in a climate often permeated by oppressive mentality; and, on the other hand, the organization raised awareness in the Lebanese and European institutions and civil society of the dramatic consequences of closing borders and rejections.

Moreover, through a proposal designed, studied, and conceived by representatives of Syrian refugees, they work daily to make the concepts of solidarity, non-violence and peace concrete and tangible to political and military decision-makers.
Ultimately it is civil society, it is the Syrian refugees who become protagonists of their time and builders of peace.