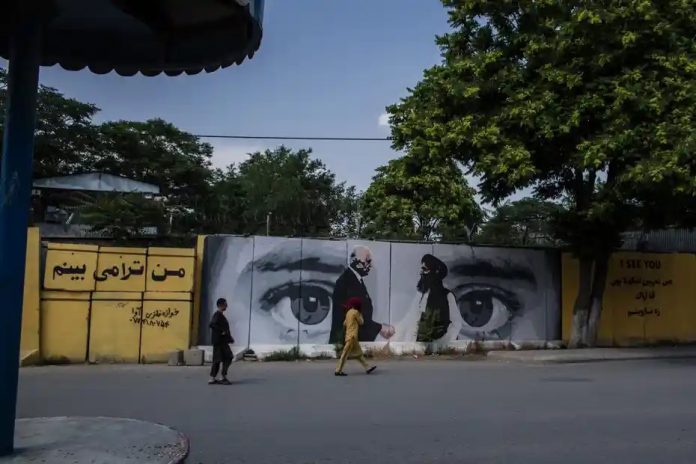 ArtLords is an artistic and cultural association, founded in 2015 in Kabul by Kabir Mokamil and Omaid Sharifi. Their project started with the decoration of the long blast walls put up in the Afghan capital. Since then, it expanded to different provinces all around the country, and the project is still very much active. The so-called “Art Lords” are taking a stand for gender equality and children’s rights, while fighting against corruption, terrorism, and drugs.

Through art and theatrical performances taking place in the streets, the movement wants to draw attention to the social changes that Afghanistan needs. Their aim is to use art as a tool for social change, making it accessible and available to everyone, and not just to the upper class. During the year 2021, ArtLords collaborated with Radio Azadi on a joint project to spread awareness on drug use and abuse and tackle this common issue. Twenty murals have been painted in seven different cities in Afghanistan. This year was, in fact, a year marked by a surge in action and initiatives, from the celebration of International Women’s Day, to the live paintings in tribute to many cultural figures.

Over time, however, the members of the movement were repeatedly threatened because of their work. After the Taliban takeover, during the first days of September 2021, the regime covered some of ArtLords’  works with slogans. On September 3rd, Omaid H. Sharifi, chairman of the association, posted a photo on Twitter, showing one of their murals that had been covered by the Taliban regime. The mural dated back to the Doha Agreement and represented the agreement sealed by the handshake between Mullah Abdul Ghani Baradar and the American envoy Zalmay Khalilzad. The Taliban regime painted over this symbol writing “Don’t trust the propaganda of the enemy”. On September 6th, NHK WORLD News posted a video on Twitter on the disappearance of a mural honouring late Japanese doctor, Nakamura Tetsu, who devoted his life to improve irrigation systems in Afghanistan. The artwork was covered with a political slogan.

ArtLords took part in several events in different countries all around the world. In Switzerland, they had the chance to have a consultation with the Swiss parliament, thanks to a project promoted by the research institute Swisspeace. In the United States, they promoted an informative event in Washington D.C., during which they discussed the current situation in Afghanistan and the attendees could replicate the murals covered by the Talibans. In Alameda, California, the refugees – along with some city dwellers – painted the “I see you” mural that had been destroyed after the Taliban takeover. In Italy, a destroyed mural was repainted as well: many young people in Turin took part in the re-creation of an artwork in honour of all the young girls and women who dream of a new Afghanistan. On December 16th, in Tirana, Albania, ArtLords artists and Afghan refugees worked together on a mural to celebrate Afghanistan, and to thank Albanian people for welcoming the refugees. The Albanian Minister of Europe and Foreign Affairs, Olta Xhaçka and the Mayor of Tirana, Erion Veliaj, were also involved in this initiative.

ArtLords is one of the nominees for the “Globalism Pluralism Award 2021”. The prize is awarded to individuals and organisations that work towards more inclusive societies worldwide. The winners will be announced in February 2022. Omaid Sharifi also won the “Sheehan Prize” for helping 54 Afghan artist escape the country after the Taliban takeover. On August 22nd, he fled the country and spent a whole month in a refugee center in the UAE to then fly to North Virginia in the USA.

Not only has the history of this association a great artistic value, but it is also politically significant. Despite being so far from Afghanistan, ArtLords keeps sending messages of peace and hope throughout the whole world.