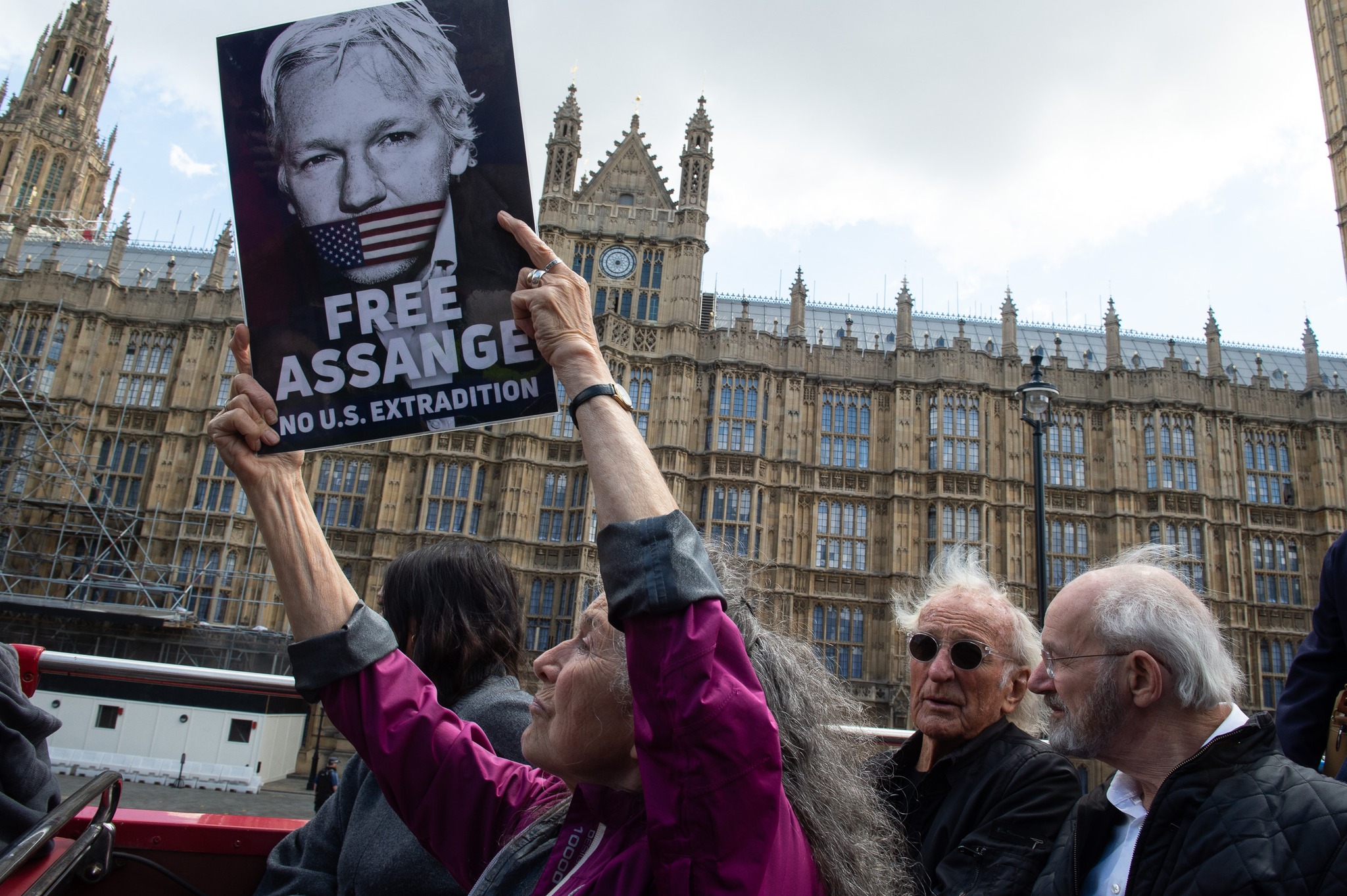 Twelve years ago on 25 July, WikiLeaks published the ‘Afghan War Diary’, while in October of the same year, the ‘Iraq War Logs’ came out: huge amounts of reports documenting the havoc of the two ongoing wars in Afghanistan and Iraq.

2010 also saw the beginning of the judicial persecution of Julian Assange, Australian journalist, programmer and activist, co-founder and editor-in-chief of WikiLeaks, who is still fighting extradition to the United States. Seventeen counts hang over Assange’s head and he faces a sentence of up to 175 years in prison. To indict him, the US used the Espionage Act, a 1917 law designed for traitors who passed information to the enemy. This law was also used in 1973 against the economist, activist and former US military analyst Daniel Ellsberg for the revelation of the Pentagon Papers, top secret documents on the Vietnam War. The ensuing court-fought battle for freedom of the press led to the charges being dropped in that case. The decision to charge Julian Assange with the Espionage Act is causing debate, because it effectively equates journalism with an act of espionage.

According to various organisations, including Amnesty international, ‘the indictment of Assange constitutes a serious threat to press freedom, both in the USA and elsewhere. Assange has carried out professional activities that are part of the everyday experience of investigative journalism. Assange’s possible extradition would criminalise common journalistic practices and allow the US and other governments to target journalists and writers outside their jurisdictions for exposing their wrongdoings”.

The Atlas of World Wars and Conflicts has joined and actively participates in the Italian campaign calling for freedom for Julian Assange. In this dossier, we retrace part of the story of the journalist and WikiLeaks.

*On the cover and below, two demonstrations in England calling for Assange’s freedom. Source:  Wikileaks Facebook page

The Afghan War Diary and The Iraq War Logs

The Judicial Saga, in a Nutshell

WHO DOES WHAT: WikiLeaks

The Afghan War Diary and The Iraq War Logs

On 25 July 2010, WikiLeaks published a collection of documents called the Afghan War Diary, an extraordinary compendium of over 91,000 reports on the war in Afghanistan from 2004 to 2010. The reports written by soldiers and intelligence officers mainly described lethal military actions involving the US military and also included intelligence information, meetings with political figures and various related details. The reports covered most units of the US military and revealed for the first time hundreds of civilian casualties that had never been counted. The files also shed light on certain special units such as Task Force 373 and the drone warfare commanded by US soldiers at a Nevada base.

In particular, Task Force 373 was a special unit that took orders directly from the Pentagon and was aimed at capturing or killing high-ranking al Qaeda and Taliban fighters. Afghan War Logs had brought to light the brutality with which these special forces acted. Even today, the Afghan War Logs remain the only public source that allows us to reconstruct the attacks, deaths, and extrajudicial killings that took place in Afghanistan during those war years.

A few days after their publication, the idea that Julian Assange and his organisation were dangerously irresponsible began to circulate in public opinion and newspaper editorial offices. Indeed, the Pentagon had every interest in delegitimising WikiLeaks.

Also in 2010, in October, WikiLeaks released what remains to this day ‘the largest leak of classified military information in history’. The 391,832 reports that make up ‘The Iraq War Logs’ document the war and occupation in Iraq from 1 January 2004 to 31 December 2009 (with the exception of the months of May 2004 and March 2009) as told by US Army soldiers.

The Afghan War Diaries, previously published by WikiLeaks, covering the same period, detail the deaths of some 20,000 people. The war in Iraq, during the same period, was, according to these reports, five times as deadly. In the desecreted files, there is also the account of the torture inflicted on prisoners by Iraqi soldiers (physical abuse of all kinds, with gruesome details, proven by medical reports) and ignored by the Americans. “Now of those deaths,” Assange said at the presentation press conference, “we see not only the total, but also how each person’s death occurred, we have the precise geographic coordinates and the operation in which they lost their lives, they are no longer anonymous. The result of this material is powerful and a little easier to understand than the complex situation in Afghanistan’.

The Judicial Saga, in a Nutshell

Julian Assange’s judicial saga began at the end of 2010, when Sweden requested the journalist’s extradition from Great Britain on sex crime charges. In 2012, after losing the case, he fled to Ecuador’s embassy in London, where he lived for seven years. In April 2019 (when the government changed in Ecuador) he was expelled from the London embassy and imprisoned for violating British bail conditions, even though the Swedish case had been dismissed.

Since that year Assange has been fighting extradition to the United States and remains in jail. On 10 December 2021, the UK High Court upheld the US appeal against the decision not to extradite Julian Assange, thus referring the case to a lower court. Since April 2019, the WikiLeaks founder has been in the Belmarsh maximum security prison in London. The facility has repeatedly been referred to as ‘the British Guantanamo’.

In July 2022, Julian Assange’s defence lawyers filed a final appeal in the High Court in London against the extradition decree to the US issued in mid-June by the British Home Secretary, Priti Pate. The application does not concern the merits, but procedural issues and has to pass a preliminary admissibility judgement of the judges before being eventually discussed. If the application is accepted, Assange will be able to play this extreme card all the way to the last instance, the Supreme Court. A final possibility could be the European Court of Human Rights in Strasbourg, but at that point the extradition order would become enforceable.

WHO DOES WAT: WikiLeaks

WikiLeaks is a multinational media organisation. Founded by Julian Assange in 2006, it specialises in analysing and publishing large datasets of censored or restricted official material involving war, espionage and corruption. So far, as the website states, it has published more than 10 million documents and analyses.

WikiLeaks has relationships with more than 100 media organisations around the world. WikiLeaks, its publisher and its journalists have won numerous awards and was nominated for the UN Mandela Prize in 2015 and the Nobel Peace Prize in six consecutive years from 2010 to 2015. WikiLeaks is entirely funded by its publisher (Assange himself), publication sales and the general public.

Julian Assange is not the only one who has suffered persecution after leaking sensitive information. The Israeli Mordechai Vanunu, for example, who in 1986 leaked state secrets proving the existence of Israeli nuclear weapons, was kidnapped while in Italy and was imprisoned in Israel for 18 years, spending 11 of them in solitary confinement. Vanunu still cannot leave his country and if he spoke to foreigners he would be arrested again.

Another case is that of Edward Snowden, a former CIA employee who in 2013 revealed information about the US National Security Agency’s global surveillance programmes. The US government blocked Snowden in Moscow, revoking his passport while he was travelling from Hong Kong to Latin America, where he had sought political asylum. Eight years later, he is still stuck in Russia.

Mexican President Andres Manuel Lopez Obrador delivered a letter to US President Joe Biden on 18 July in which he defended Julian Assange’s innocence and renewed his previously formalised offer of asylum to the WikiLeaks founder. “I left a letter with the president about Assange, explaining that he has not committed any serious crime, he has not caused anyone’s death, he has not violated any human rights and that he has exercised his freedom and that arresting him would be a permanent affront to freedom of expression,” Lopez Obrador said at a press conference.

Meanwhile, petitions, sit-ins and demonstrations in support of Assange involve hundreds of organisations worldwide. In May 2022, Reporters Without Borders delivered a petition of almost 64,000 signatures to the British Home Office and six British embassies around the world asking them to reject the extradition order and ‘act in the interests of press freedom and journalism by securing Assange’s release’. Nineteen press freedom, freedom of expression and journalism organisations then made a joint appeal to the Home Secretary to reject the extradition request. The groups stated that Assange’s prosecution ‘would set a dangerous precedent that could be applied to any media outlet that published stories based on leaked information, or indeed any journalist, editor or source anywhere in the world’. Despite a request for a meeting, the letter went unanswered.

We choose weapons over the planet

Turkey: arrests and forced deportations of hundreds of Syrian refugees