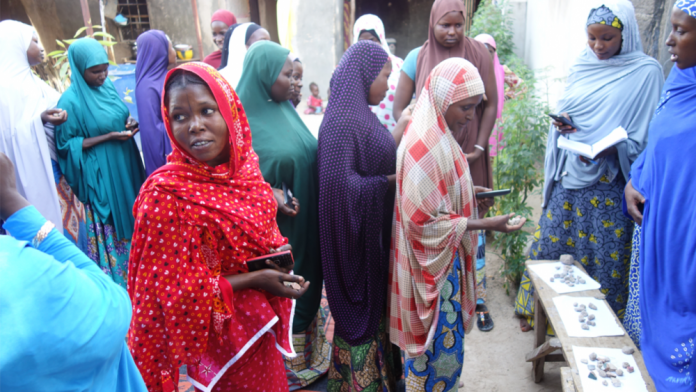 Since 2009, the Boko Haram uprising and subsequent responses have devastated northeastern Nigeria and the border regions of Cameroon, Chad and Niger. The conflict has caused the deaths of several thousand people, over 2.3 million people are displaced and it left at least 7.7 million people in need of urgent humanitarian assistance. (Check out the Nigeria Conflict factsheet here)

Although the government has achieved some limited success against insurgents in recent years, the violence persists and key issues of conflict remain unsolved. The experiences of conflict, as is the case in all conflicts, have been diverse along gender lines.
Men, especially young man, were disproportionately recruited, killed and detained by Boko Haram and the Nigerian security forces. Generally man have more resources and opportunities to escape violence than women. As a result, women from conflict-affected communities make up the majority of vulnerable internally displaced persons (IDPs) in the Northeast, with many now solely responsible for the protection and economic well-being of their families.

The historical dynamics of power in the Northeast, as often happens in conflicts, have excluded and marginalized women from the political, social and economic spheres, making it difficult for women to counter the insurgency and making them more vulnerable to recruitment by Boko Haram.

Some international organizations are involved in this area and one in particular, Conciliation Resources with the support of the National Endowment for Democracy, are working with women from some of the communities that are most affected by the conflict in order to create spaces where women feel safe, free to express themselves and recount their individual stories and experiences.

Conciliation Resources is an independent organisation, founded in 1994, that works with people in conflict zones to prevent violence and build peace by providing advice and support. The National Endowment for Democracy (NED), founded in 1983, is an independent, non-profit foundation dedicated to the growth and strengthening of democratic institutions around the world. The organisation focuses on the areas most affected by the conflict in the states of Borno and Yobe, working with local partners such as Hope Interactive, the University of Maiduguri and the Muslim Women’s Association in order to create narrative spaces for women only.

In the twelve communities where the associations work, hundreds of women have already had the opportunity to share their stories of conflict. This is done with the aim of helping to process and over time overcome traumatic experiences by creating a feeling of trust and a close network of support among women. Participants are also able to come together to discuss their needs and concerns, to work together to support solutions and identify strategies within their communities. These safe spaces are fundamental in society but often do not exist, especially during conflicts.  The ultimate goals of this project is to create a place where all women can feel heard and to promote an environment where everyone can participate equally in politics, regardless of gender, thus encouraging women’s political participation.

The project aims to achieve its goals by producing and disseminating a variety of media and artistic content that normalise women in leadership positions and mobilise them to run for political offices. The organization has announced that, in the near future, it will also host an online talk show, and organize an art exhibition. A documentary, which aims to promote messages in favour of gender equality, will be produced from the project.