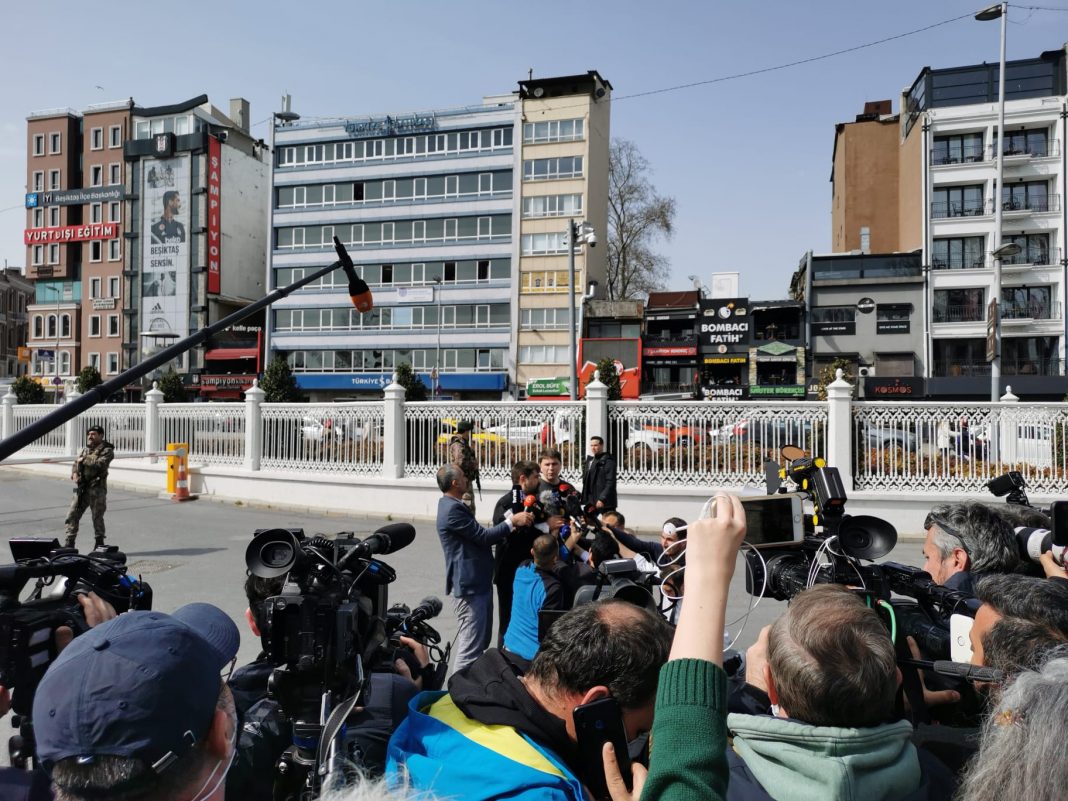 By our envoy to the negotiations, Filippo Rossi

Yesterday at around two o’clock in the afternoon, the negotiations between Ukraine and Russia, organised by Turkey and opened by Turkish President Recep Tayyip Erdogan, came to an end in Istanbul. He welcomed the two delegations saying that they both had a “historic responsibility to put an end to a war that is in nobody’s interest”. At the Dolmabahçe palace, closed to the press, the results were more concrete than expected and should be considered as progress. Dialogues – the first since the meeting of March 10 in Antalya – described as “significant” by Russia’s chief negotiator Vladmir Medinsky. This news could finally give hope for an end to the conflict that has been going on for more than 30 days.

During the meeting, Russian Deputy Defence Minister Alexander Fomin said that Russia had drastically reduced its military activities in the Kiyv and Chernihiv regions to “foster conditions for dialogue and increase confidence”. In fact, some units of the Russian army have reportedly withdrawn. However, this was only after Ukraine changed its position and agreed to negotiate on a possible neutrality status based on security guarantees.

“We want an international mechanism of security guarantees like Article 5 of NATO” (the article according to which an armed attack against one or more members of the alliance is considered an attack on all parties) said Ukrainian negotiator David Arakhamia.
According to the group of 9 Ukrainian negotiators present, the country would be willing not to host foreign military bases, not to be part of any military alliance and not to aspire to the status of a nuclear power, but in return it would require a protective status through a system of guarantor countries, which would protect its territory in the event of attack. In addition to Turkey, a country that is decisive for the progress of negotiations, the countries proposed include Israel, Poland and Canada. According to some Ukrainian media, Italy is also expected to be a member, but this has not been confirmed. “If we manage to consolidate these points, which are of fundamental importance to us,” said one of the nine Ukrainian negotiators, Aleksander Chaly, “Ukraine could become a completely neutral state, non-nuclear and not belonging to any bloc”.

These negotiations have also paved the way for a potential first ceasefire, which, according to the Ukrainian negotiators, is a prerequisite for talking about another key point discussed in recent days and also in Istanbul: Crimea and Sevastopol. The Ukrainians would in fact be willing to negotiate a 15-year period of consultations on the disputed region only after a complete ceasefire. According to some agencies, prior to the conference, Zelensky also spoke out on the status of the Donbass.

Finally, as the two teams report progress to their respective presidencies, a meeting between Russian President Putin and Ukrainian President Zelensky appears more and more real and imminent. Proposals from both sides have been the most concrete so far, perhaps the beginning of a possible end to a conflict that has already claimed thousands of lives.