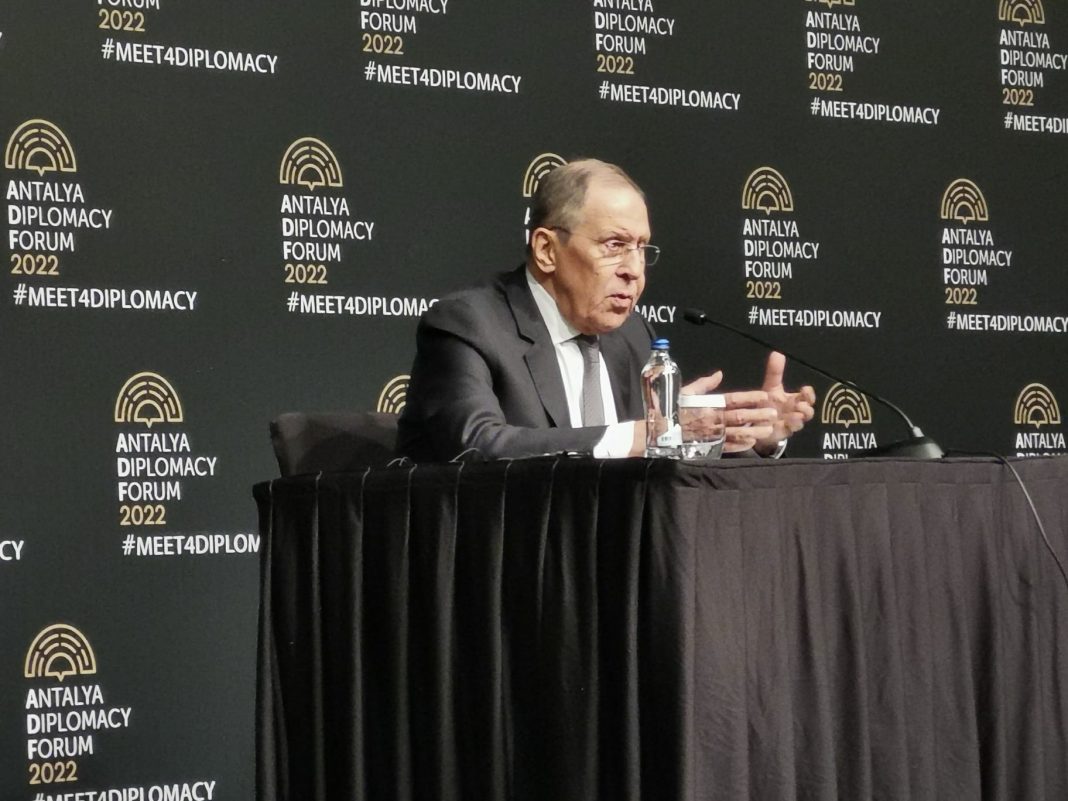 By Filippo Rossi, in Antalya for Atlas of Wars/Atlante delle Guerre

Antalya (Turkey) – No breakthrough in sight. In the seaside resort of Belek, near Antalya, the icy winter wind greeted the Russian and Ukrainian foreign ministers, Sergej Lavrov and Dmytro Kuleba. Although the meeting marked a turning point, and was a success for Turkey, which has been mediating between the two countries since the beginning of the crisis, it was also stained with blood: not many hours earlier, a hospital in the city of Mariupol had been bombed by Russian forces.

After the series of negotiations held earlier in Belarus, the summit ended without any particular results. Nevertheless, Turkish Foreign Minister Mevlüt Cavusoglu – who was present during the talks between the two counterparts – described it as “an important first meeting that could be a step towards a summit at higher levels”. After an hour and a half of discussions, the Ukrainian minister mentioned “difficult” conversations with his counterpart, teasing his Russian counterpart with a provocative remark: “It seems that there are other decision-making powers in Russia”, probably referring to the Kremlin’s high ranks. In an atmosphere of great expectation among journalists, the Ukrainian foreign minister stressed the fact that he could not achieve progress on the call for a 24-hour ceasefire and a solution to the humanitarian crisis. Lavrov, for his part, expressly stated that this meeting could not take the place of the current talks in Belarus.

Kuleba also accused Russia of not opening and respecting humanitarian corridors, especially in the city of Mariupol, where he described the situation as “worrying”, adding that “Minister Lavrov could not keep this commitment”. On the other hand, his counterpart, Russian Foreign Minister Sergei Lavrov, reiterated Russia’s willingness to maintain humanitarian corridors and to have put them into operation, accusing on the contrary “Ukrainian forces that would not allow the evacuation of civilians, who are being held hostage”. “We want a solution by diplomatic means,” he said.

But there was more than talk of a ceasefire and humanitarian corridors. On the sidelines of the negotiations, Lavrov, for the first time since the beginning of the war and in front of an audience of journalists, was able to explain and clarify the reasons that prompted Moscow to invade Ukraine a fortnight ago. According to the Russian minister, however, ‘Russia did not invade Ukraine, but had to act to counter a serious threat to Russian ethnicity, culture, language and population’. In this connection, he dwelled on the importance of the presence of biological laboratories in Ukraine, which were allegedly financed by the US in order to “annihilate an ethnic group”. “They are a danger to us. How is it possible that Europe had no information about this? The Americans did this in many countries of the former USSR.”

Lavrov then focused on the presence of a “hostile government in Ukraine” and NATO’s growing influence in the region. And he pointed to Kiev’s willingness to “abandon its status as a country without an atomic bomb”. “We, Russia”, he said, “are not a threat to the West and NATO, we only want Ukraine to become a demilitarised country. A neutral Ukraine is in everyone’s interest. Countries that finance and militarily support Ukraine are putting themselves in danger. Russia has never talked about nuclear war or World War III. Nobody wants to expand. It is the Western countries that keep talking about it. How can you even imagine such a thing?’.

Finally, the Russian minister dwelt on the sanctions against his country and the need for Russia to “become independent of everyone”, including Europe. “This is an act of war to destroy our economy,” he added, “and Russia itself. We will find ways to become independent,” he said, accusing the West of “clear political aggression”. Finally, the minister also responded to questions about the hospital bombed in Mariupol, justifying the attack and saying that the place “had been occupied by the extremist battalion Azov. The group is trying to turn Ukrainians into human shields.”

Lavrov, on behalf of Russia, said he was willing to negotiate. “We want a free and denazified Ukraine,” he concluded, saying that President Vladimir Putin would not be averse to a meeting with Zelensky. While there is already talk of a possible meeting at the highest level, nothing concrete has been done in Antalya. And the humanitarian situation worsens as the number of victims on the Ukrainian front continues to rise.

Cover Image: Lavrov in a photo by Filippo Grandi for Atlante delle Guerre