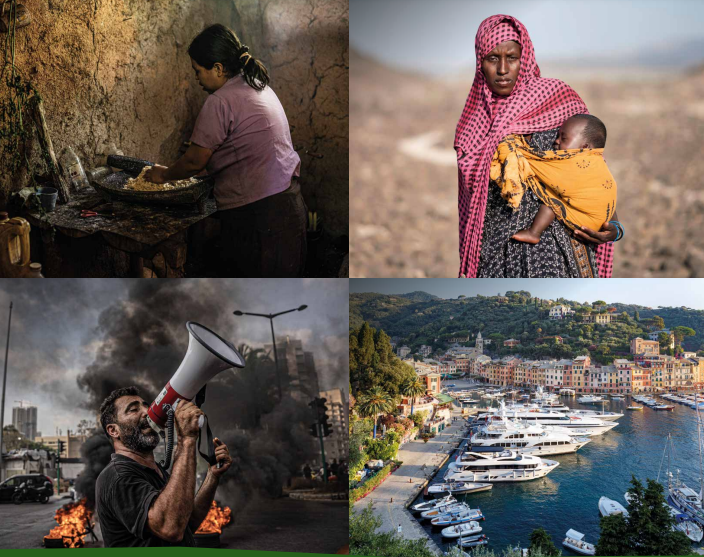 Inequality contributes to the death of one person every four seconds. The world’s ten richest men more than doubled their fortunes from $700bn to $1.5trillion during the first two years of the Covid-19 pandemic, while the incomes of 99% of humanity fell and 160 million more people live in poverty.

These are some of the figures that emerged from the report on inequality 2022 entitled “Inequality kills” published by Oxfam on 17 January 2022, as is its custom before the World Economic Forum’s Davos Agenda.

Differences between and within nations

Who does what – how rich are the richest

Oxfam estimates that inequality is contributing to the deaths of at least 21,300 people every day, one person every four seconds. The figure is presented as a ‘highly conservative’ estimate that takes into account deaths due to hunger, denied access to quality health care in poor countries, and gender-based violence. An estimated 5.6 million people die each year due to lack of access to health care in poor countries. For example, in São Paulo, Brazil, people in wealthier areas can expect to live 14 years longer than those in poorer areas.

Differences between and within nations

When the coronavirus crisis started, almost half of humanity (3.2 billion people) were living below the poverty line (i.e. living on less than $5.50 a day) set by the World Bank. According to Oxfam, the pandemic has led to a sharp increase in poverty worldwide. It is estimated that 163 million more people will live on less than $5.50 a day than when the pandemic began. “The crisis,” it says, “has shown that, for most of humanity, there is no permanent way out of poverty and insecurity. Instead, at best, there was still a temporary respite’.

While most people experienced a drop in income in 2020, 2021 saw an increase in inequality between nations. The World Bank predicts that the income of the richest 20% of humanity will recover almost half of what they lost in 2020, while the poorest are expected to lose a further 5% of their income in 2021. This is largely due to the resumption of economic growth in rich nations where the majority of the richest 20% live. The gap, according to Oxfam, is the result of persistent vaccine apartheid. World Bank projections also show that unless action is taken to reduce this inequality, poverty levels are likely not even to return to pre-crisis levels by 2030.

WHO DOES WHAT: how rich are the richest

the 10 richest men on earth – Elon Musk, Jeff Bezos, Bernard Arnault, Bill Gates, Larry Ellison, Larry Page, Sergey Brin, Mark Zuckerberg, Steve Ballmer, Warren Buffett – have seen their weatlth double, while the incomes of 99% of humanity have fallen, due to the Covid-19 pandemic. The 10 richest men in the world own more than 3.1 billion people combined. For reference, if these 10 men spent a million dollars each per day, it would take them 414 years to spend their combined wealth. Graphically? If the 10 richest billionaires sat on top of their accumulated wealth in dollar notes, they would be sitting almost halfway to the moon.

FOCUS 1: gender inequalities and environmental ones

Inequality affects women the most. It is estimated that millions of women
die worldwide due to a combination of female mortality and sex-selective abortion (child preference). In addition, 67,000 women die each year from female genital mutilation or homicide at the hands of an ex or current partner. Oxfam’s experts have argued that the pandemic has set gender equality back in time, from 99 years to 135 years. Women collectively lost $800bn in earnings in 2020, with 13million fewer women working now than in 2019. 252 men have more wealth than the billion women and girls in Africa, Latin America and the Caribbean combined.

But climate is also an enabler of inequality. The NGO estimates that 231,000 people a year could be killed by the climate crisis in poor countries by 2030. Inequality also goes to the heart of the climate crisis, as the richest 1% emit more than twice as much CO2 as the poorest 50% of the world, driving climate change and its consequences (fires, floods, tornadoes, scarce harvests and hunger).

Oxfam’s 2022 dossier defines poverty as “a form of economic violence perpetrated against billions of ordinary people around the world every day”. This is a widespread form of violence, cross-boundary in nature, because in every country the poorest people live shorter lives and face an earlier death than those who are wealthier. In addition to deaths caused by lack of access to health care, poverty kills people through food insecurity and housing insecurity.

Based on data from the Integrated Food Security Stages Classification, which assesses the severity and extent of acute and chronic food insecurity and malnutrition, it is estimated that hunger kills at least 5,773 people every day. Oxfam’s estimate, however, is far more dramatic, reporting 14,916 deaths per day. This situation has taken an even heavier toll on children: with the closure of schools due to the pandemic, 369 million children have lost their school meals, which for many were their main meals.