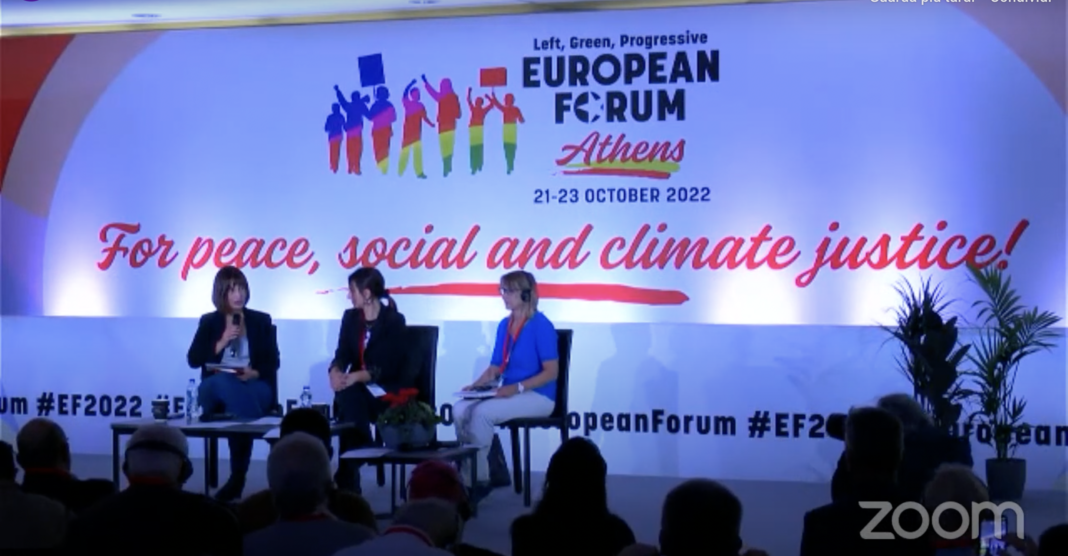 In a Europe increasingly affected by structural crises that threaten to undermine the social peace it has enjoyed since the end of World War II, the Left, Greens and Progressives met in Athens on 21-23 October to discuss a shared strategy capable, first and foremost, of ensuring peace and justice on the Continent. Here is a report.

By Leonardo Delfanti, from Athens

The European Forum was officially opened by former Greek Prime Minister Alexis Tsipras, who recalled that “in the last ten years the neo-liberal doctrine has proven to be a militarist doctrine” capable of developing only at the expense of “people and the environment”. The forum was attendend by hundreds among parties, think tanks and acticists from across the European scene. The starting point for all the speeches, of course, was the war in Ukraine, which has been unjustly invaded by the Russian Federation since February and for which the forum expressly called in its final declaration for ‘a ceasefire in full compliance with international law’.

The unreserved condemnation of Russian aggression cannot, however, be complete except in the light of its historical roots. Paul Rainer of the International Peace Bureau points out that ‘NATO enlargement is a precondition for this conflict’. The reference is to the violation of the Minsk agreements, which many have read as a breach of shared interests based on the desire for peace and prosperity for the maintenance of common security. This theory, recalls Axel Ruppet of the Rosa Luxemburg Foundation, is reflected in the fundamental assumption that ‘your security is my security’. Consequently, the question that all progressive forces are asking is, in Ruppet’s words, ‘whether the arms race is really creating a better world or whether it is literally creating a worse one’.

The issue of the ultra-militarisation of Europe, which is now proceeding apace with a 2021-2027 budget projected at around EUR 20 billion, compared to the 6.7 spent between 2014-2027, is, in Athens, the key that opens the door to the great issues of the present. If in fact ‘the outbreak of war in Ukraine is only accelerating the process that finds in war an excuse to speed up’, for the Rosa Luxemburg Foundation ‘this war offers new financial instruments to the arms lobby’.

In order to critically understand the mechanism that binds the arms industry, including the Italian Leonardo, and the European Commission, it is important to read the German think tank’s report “A Miitarised Union”. Published last year, when this war had not yet polarised the public debate into support for or against Ukraine, the text also sees the active collaboration of ENAAT, a network that aims to bring together all the European voices opposed to arms sales.

And it was ENAAT itself that denounced in Athens how the issue of security was able to make ‘even climate change an instrument of war’. The military lobbies, in fact, make extensive use of European funding for the development of ‘sustainable weapons’. The extreme temperatures to which the vehicles will be subjected, together with the increasingly urgent need to decouple energy dependency and tactical operability, have meant that the arms industry also has access to LIFE funds, the spearhead of EU funding for the environment and climate. Yet the greenwashing slavishly observed by the power structures does not find, in the analysis of Tobias Pfluger of the Observatory on Militarisation, ‘a counterpart in the will of the people’. In this hiatus, the Left sees a space in which to effect change.

Emblematic in this sense is perhaps the case of the Sahel, a territory sandwiched between the Sahara desert and the African savannah, rich in mineral resources and for two centuries subject more or less directly to French influence. Dr. Félix Atcahedé has dedicated his entire life to understanding the role of the European superpower in the heart of Africa and has no doubts: ‘the ultra-militarisation of Europe goes hand in hand with the idea of installing troops in Franco-African complexes’, forcing cooperation in a territory highly subject to climate change and where insurrections are branded as terrorism when ‘the problem of the region is poverty, the fight against climate change and poor access to water resources’.

With the justification of fighting terrorism, France “forces armed cooperation with nations completely subject to Paris”. But the solution is not effective: “a solution must be found to neoliberalism, the real root of social subversion”. For Atcahedé, a renunciation of militarisation in favour of sovereign cooperation between countries is unavoidable. “Armed forces are not the solution to the problem. Militarism has failed and the proof is that France has had to withdraw its troops from Mali.

Cover image: still from the opening remarks of the conference.