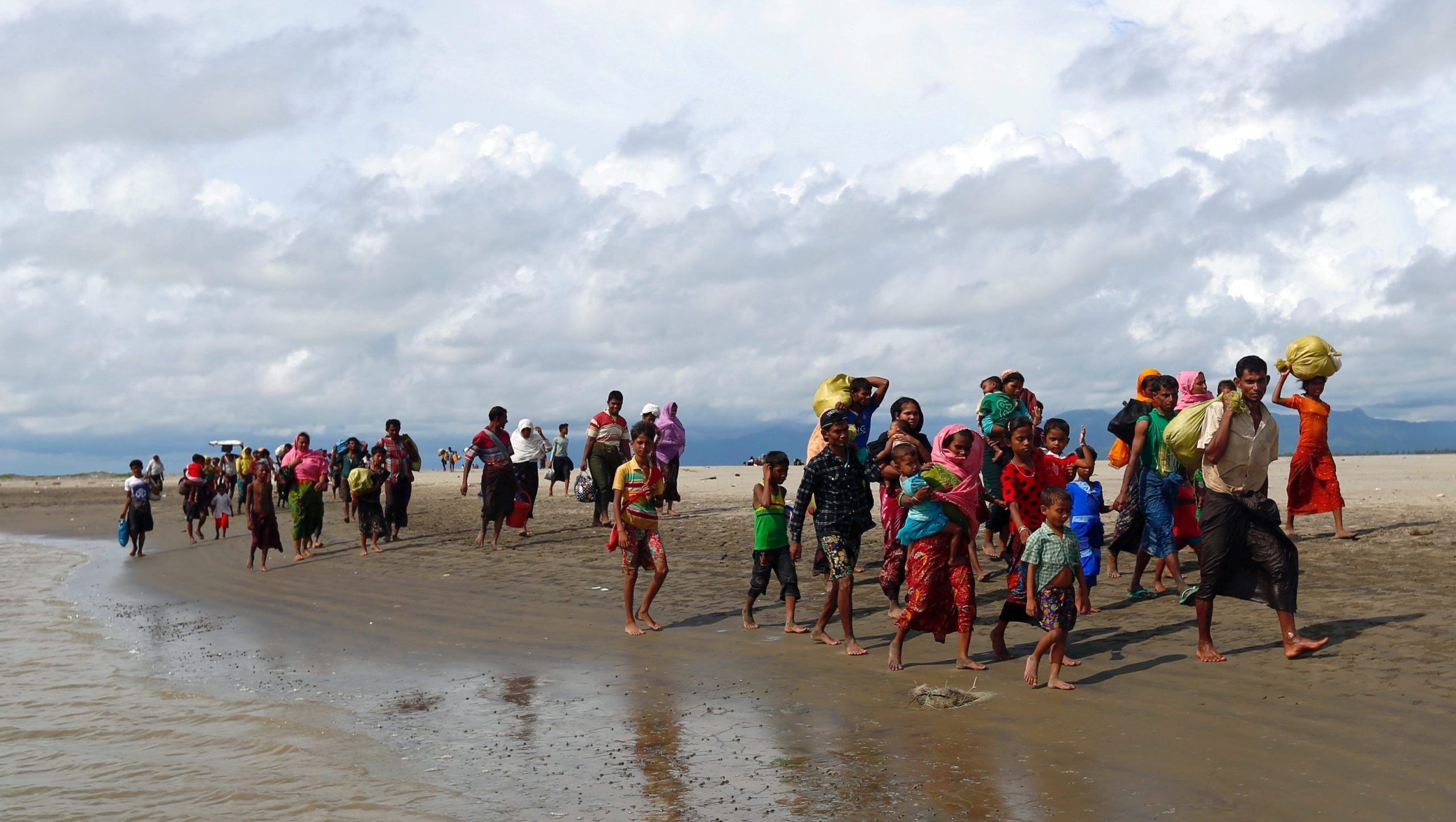 They have always been a persecuted nation. The Rohingya, a population of Muslim faith who live in the Burmese Rakhine region, have a history of violence and discrimination stretching from their past to the present day. Today, they can be considered one of the most repressed populations in the world: they cannot move, they are extremely poor, constantly harassed and, in fact, stateless. And those who live in Rakhine are now only a very small part of the community: the vast majority of the Rohingya are now part of the diaspora, from Bangladesh to Saudi Arabia, from India to Indonesia.

This dossier, part of a three-piece series, retraces some stages of the Rohingya persecution, the exodus-massacre of 2017 and 2018, analyzing as well the role of a heavily criticized Nobel Peace Prize winner (Aung San Suu Kyi) and the harsh UN report of the summer of 2018.

WHO DOES WHAT: The Rohingya People

After yet another flight of tens of thousands of Rohingya to Bangladesh in 2016, the biggest ever exodus took place in August 2017: following armed attacks in the Burmese army’s checkpoints of Rakhine by the armed group Arakan Rohingya Salvation Army (ARSA), the military has undertaken a systematic repressive military operation against the Rohingya, including massacres, sexual violence, systematic fires and a series of crimes against humanity. A real ethnic cleansing operation – as defined by the UN High Commissioner for Human Rights – which led over 700,000 people to flee to Bangladesh and India. An escape on foot, a slow and incessant march that has shaken the Western public opinion for months.

Over 700 thousand people have found refuge in Bangladesh, crossing the border clandestinely, or in over 70 refugee camps located in the “no man’s land” between the two countries, in makeshift camps. In November 2017, Bangladesh had concluded with the Burmese government a repatriation plan for the thousands of refugees who had crossed the border: a program that has never been implemented.

Although it was stated that the repatriation would be “on a voluntary basis”, Human Rights Watch had denounced that the centers in which the Rohingya were detained pending return had nothing voluntary. Amnesty International also intervened, noting that the return of the Rohingya to Myanmar would mean their return to “a vicious system of state-sponsored institutionalized discrimination that amounts to apartheid”. Moreover, a first attempt in 2018 to repatriate some families eventually failed.

The UN intervention made it clear that Bangladesh will have to respect its international obligations – including the principle of non-refoulement, which prohibits repatriation of anyone who could be killed or persecuted in its country. For this reason, the High Commissioner for Human Rights, Michelle Bachelet, has asked Bangladesh to suspend repatriation plans until they are guaranteed safe conditions once they return to their “homeland”. And so the fate of the Rohingya refugees remains pending, between refugee camps, clandestinity and the shadow of “reception centers” ready to welcome them back to Myanmar, with barbed wire on the perimeter and armed guards surrounding them.

Genocide and crimes against humanity. These are the possible crimes committed by the Burmese generals which the ICC asks to investigate. The International Criminal Court (ICC), has launched an investigation procedure that could include accusations of crimes against humanity or even genocide, as suggested by a ruling by the Permanent Peoples’ Tribunal. Under accusation are the chief of the Myanmar army, Min Aung Hlaing and others in the higher military ranks.

In August 2018, the United Nations had in fact published a text that testified in 440 pages the horror suffered by the Rohingya in the previous months. The document, based on hundreds of testimonies, demanded that the investigation into several possible crimes be referred to the International Criminal Court, or that an ad hoc court be established, as in the case of Rwanda and of former Yugoslavia.

The UN report stems from the work of the UN independent international commission of inquiry into Myanmar, set up in March 2017, to investigate widespread allegations of human rights violations against the Rohingya population. The report recounts the tragedy of thousands of rapes, killings, violence, arson of entire villages, victims caused by anti-personnel mines positioned on escape routes, and much more.

The Burmese government harshly criticized the report. The Foreign Ministry – headed by Nobel peace prize Aung San Suu Kyi – had in fact declared in a statement that the text “will only serve to increase divisions and mistrust” in the country. “This report is not only detrimental to social cohesion in the State of Rakhine – continued the note – but also undermines the government’s efforts to bring peace, national reconciliation and development to the entire country”.

WHO DOES WHAT: The Rohingya People

The Rohingya are a population of Muslim faith who have resided (for centuries) mainly in the state of Rakhine, in Myanmar, on the border with Bangladesh. But many Rohingyas live in other countries, after being forced to flee due to violence: various refugee communities exist, for example, in Bangladesh and Malaysia. The term Rohingya is however quite recent and was coined in the name of an identity denied by the Burmese government, for which the Rohingya are not a recognized citizenship: they are considered illegal Bengali immigrants.

The Rohingya in fact are not recognized among the 135 official minorities of Burma and are therefore not considered as Burmese citizens: the government declares they are immigrants who only entered the country with the British colonization. In fact, many Rohingya arrived in Burma as workers during the British colonial period, between 1824 and 1948, when Myanmar was part of the British Overseas Empire.

Since the Burmese government does not recognize their citizenship, people cannot move freely in the country. Most Rohingya live in overcrowded camps outside the city of Sittwe, the capital of Rakhine. The Rohingya (who represented about 4 percent of the Burmese population) are for the most part very poor. In total, the population is about 1.1 million people. The spoken language, Rohingya, is similar to the Bengali Chittagong dialect spoken in Bangladesh.

The repression of the Rohingya is rooted far back in time. When Myanmar gained independence from the United Kingdom in 1948, the Rohingya were allowed to apply for identity documents and access certain rights and seats in Parliament, hence essentially being granted citizenship.

However, things changed with the military coup of 1962: the Rohingya lost their status and were definitively considered foreigners. In fact, most of the population have never been granted the documents to prove their roots. For this reason, many are still stateless. The military government, which has ruled the country for half a century, has discriminated against all minorities, but reserving an especially harsh treatment to the Rohingya people.

Since the 1970s, but more intensely since 2011, when the military government began the transition to civilian power, the Rohingya have suffered repression and violence. Today, just like in the past, the population does not have access to the same resources and services as other citizens and cannot leave the Rakhine settlements without governmental approval. The Rohingya, still today, cannot own land.

For years, tens of thousands of Rohingya have tried to escape from their repressive country  by sea, to Thailand, Malaysia and Indonesia  – where they are often rejected – or by land, to Bangladesh. The vast majority of Burmese Rohingya now live outside the country.

The de facto ruler of Myanmar, despite the presidency being formally held by Win Myint, is Governmental “adviser” Aung San Suu Kyi, famous activist for human rights and Nobel Peace Prize winner in 1991. But the past merits of San Suu Kyi seem to not have saved her from an avalanche of controversy that arose over her stance regarding the Rohingya: from the top of her very high government office, the Nobel Prize has always defended the work of the government despite having promoted a commission of inquiry – headed by Kofi Annan – whose recommendations, however, have not been adopted by the government.

Despite her long history of political activism, in fact, the Nobel Peace Prize is accused of not using her office – political and moral – to safeguard the human rights, justice, equality and freedom of the Rohingya people, or to protect any freedom of expression in Myanmar.

Thus, although an “ambassador of conscience”, as she was awarded by Amnesty International in 2009, Aung San Suu Kyi betrayed all the values ​​she had fought for in the past: a decision that cost her the withdrawal of the honor by part of Amnesty, and a resounding rebuke from the United Nations. Criticism was also received in the committee responsible for the Nobel Prize attributions.

The reason for so much resistance is partly written in the Constitution which allows the military to dissolve the government in the event of a threat to the security of the state. This does not absolve the Nobel recipient, but helps the readers understand her difficulty in going against the power of the army in a country such as Myanmar.