With the Conference of the Parties or COP26, held in Glasgow (Scotland) in early November, the world has turned its attention to the climate crisis that looms over our collective future. Leaders around the planet – or their spokespersons, in cases such as China and Russia, whose heads of state did not attend the forum – have discussed a new agreement that replaces the 2015 Paris agreement in dictating new rules for the State Parties to protect the planet. Several were the issues at stake, but a great absence fills the silence: war, which maintains a significant role in contributing to global pollution. 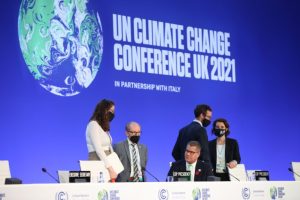 The summit and the agreement

The two weeks of discussion, hosted by the British government of Boris Johnson, were under the banner of a catchy, as well as superficial, slogan: the mantra “cash, cars, coal, trees” was repeated on the global agenda to set the priorities of the summit. First, the promise of one hundred billion dollars a year, to be dedicated by the developed States for the green transition of the developing countries. The idea is simple: those who have had the opportunity to get rich by exploiting fossil fuels for decades will have to help those States which are now asked to not do the same, but rather to invest in “green” energy.
Secondly, cars: they will all have to become electric in the upcoming decades, if we want to reduce the CO2 emissions of our communities. This change can only be achieved by involving the big manufacturers, now committed to shifting automotive engineering towards “cleaner” mechanics by 2040.
Third: coal, and all fossil fuels, from which the global economy will have to emancipate itself in order to win the fight against climate warming. The alternatives exist and have proven to be efficient: from solar to hydro, to wind, to nuclear power. The governments of the world will have to make a concrete commitment, with investments in research and transition, to break the world’s dependence on oil, coal and natural gas. Finally, the trees: those that we are still cutting down at a record speed in the forests of the planet (from the Amazon to New Guinea, as we have analysed here) and that the leaders of the world will have to commit to protecting and replanting. The lungs of the world, and the biodiversity that goes with it, are unequivocally the responsibility of our governments, and it is their mandate to restore them.

Four elements, therefore, we need to commit to in order to achieve what is the goal of the Planet: to keep global warming below the – critical – threshold of 1.5 ° per year. Scientists were crystal clear in their ultimatum: if the planet’s temperature continues to rise beyond this threshold, we are all beyond saving. From the extreme climate changes that we continue to witness (such as the floods and fires of summer 2021) to the melting of glaciers and the rise in sea level, that degree and a half celsius represent our last hope. Illustrious guests and activists (including the young catalyst, Greta Thunberg) repeated it for the duration of the summit, up until Saturday 12 November, when the conference closed and the new pact on the environment and climate was presented to the public.

The agreement already makes the news in itself. The huge involvement of nations around the world was at the same time a victory, which demonstrated the seriousness of all in protecting the planet, and a limit. “We cannot force sovereign states to do what they have no intention of doing,” said the host Boris Johnson as a sort of justification. So, what does the pact that now binds our governments foresee? The goal of 1.5 ° was not achieved, as was to be expected. While governments have pledged not to exceed 2 ° per year, the critical threshold of 1.5 ° “remains on the table for the 2022 summit”. Similarly, global dependence on fossil fuels won’t cease: while the original text required governments to exclude the use of these energy sources, the text approved by the negotiators now requires member countries to “reduce” the use of these sources. fuels. Economic support for developing states was approved, with a target of 500 billion by 2025.

There has been no lack of criticism of global leaders: the constant reference to everyone’s individual environmental choices sounds bland, if their elected representatives fly to and from Glasgow with private jets, producing emissions equal to those that 1600 people they would produce within a year.

But above all, the hypocrisy of Western and global governments was underlined regarding the great absentee in the conversation: the emissions caused by military missions, which show no sign of decreasing. The pollution caused by the 34 active wars in the world today, and by all those that preceded them, is massive and under our eyes. Yet, the States that participated in the Conference of the Parties – and that have a duty to report data on pollution caused by their military missions to the United Nations Office for Climate Change – present mostly confusing, far from reality and downplayed data on their actions.

This is the result of the “MIlitary Emissions Gap” project, a research conducted by the Conflicts and Environment Observatory: the British NGO, in collaboration with the Universities of Lancaster and Durham, has mapped and analyzed precisely the gap between the data reported to the UN and the actual pollution caused by wars. 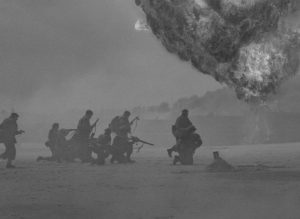 Photo: Duncan Kidd, UnsplashConflict-caused emissions are more than those we immediately imagine, explained British scientist Eoghan Darbyshire at the COP26 project presentation conference. It is not just about the movement – already immense in itself – of soldiers, means of transport, weapons and equipment. Their livelihoods (from food and fuel supplies to heating their establishments) is just the first addition to a growing list. In addition are the emissions caused by explosions, incendiary weapons (which often destroy huge areas of vegetation as they quickly spiral out of control), and the military strategy of destroying crops to force local populations to surrender. Or, on a similar note, is the common practice of gas flaring, that is the burning of fossil fuels in order to make sure that such profitable resources are unusable, so that terrorist groups and opponents cannot economically benefit from their sale. Not to mention the environmental cost of humanitarian missions, which are very expensive from the point of view of fuels and resources, especially when victims’ support is to be brought in situations where infrastructure has been destroyed by the conflict.

All these emissions obviously add up to the costs and emissions associated with the reconstruction of countries and territories torn apart by the conflicts. In short: if military spending continues to be very high and profitable in the West (3.75% of the US gross domestic product is linked to the purchase of war material, for over 20 trillion dollars), its environmental cost is devastating. In the United Nations reports, governments manage to get away with reporting a very small part of their war emissions. In international law, there is no trace of their responsibility for the environmental cost of all the consequences of the war.

The civil society activists continue to protest that the budget allocated to military spending is too high, and that part of it should instead be aimed at reaching that threshold of 1.5 ° celsius that will save us all. But, for now, in the world leaders’ agreements – and in the Conference of the Parties – there is no trace of all this.