Home Environment The owners of the world 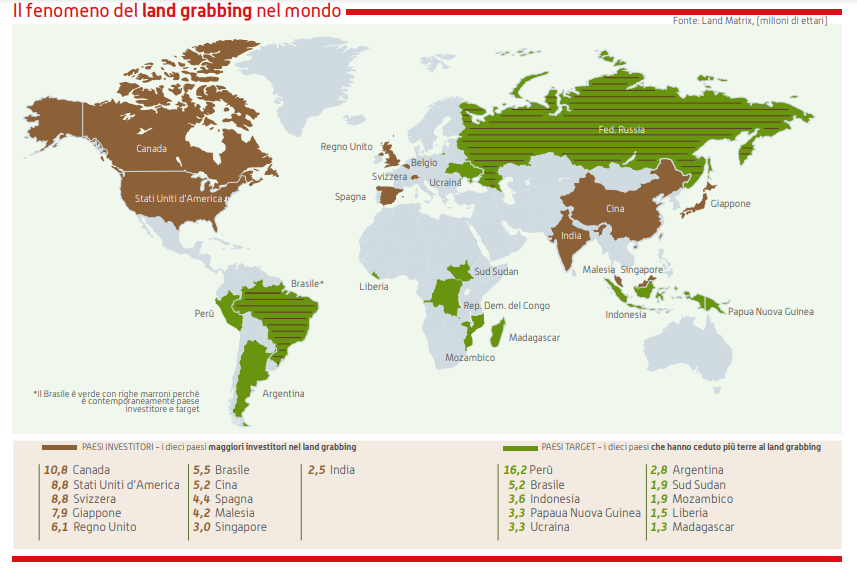 Rome, July 7th 2022. In the Chapter House of the Cloister of the Convent of Santa Maria sopra Minerva, was presented the 2022 Report on Land Grabbing: “The Owners of the Earth. Report on land grabbing 2022: consequences on human rights, environment and migrations”, on the initiative of Senator Mario Taricco.

Conceived and drafted by Focsiv – Federation of Christian Organisations International Voluntary Service, within the framework of the Campaign “Abbiamo riso per una cosa seria”, a 20-year long initiative aimed at supporting family farming against large-scale land grabbing operations, with the patronage of GreenAccord and the contribution of the Faces of Migration project co-funded by the European Union. The premise of the five editions of the Report is the awareness that land, especially fertile land and healthy water, are resources that are running out, in a global market that engulfs everything with a developmentalist and extractivist model.

Also “The Owners of the Earth 2022” is dedicated to 358 human rights defenders killed in 35 countries for opposing large-scale devastation and pollution of forests, land and water, fighting in defence of the Planet and the right of everyone not to be exploited or marginalised and to be able to live in a healthy and sustainable environment.

The Report reveals that 91.7 million hectares of land have been grabbed over the last 20 years to the detriment of local communities, farmers and native peoples, according to the latest March findings of the Land Matrix database, the site that collects information on contracts for the sale and lease of large tracts of land. This phenomenon is concentrated in a few countries: the most involved is Peru with 16 million hectares, followed at a distance by Brazil and Argentina, Indonesia and Papua New Guinea, while in Eastern Europe there is Ukraine, and on the African continent South Sudan, Mozambique, Liberia and Madagascar.

Of Ukraine’s 60 million hectares of total land area, 55% is classified as arable land, the highest percentage in Europe. Millions of Ukrainian villagers, with the privatisation of land during the land reform process, have been allocated small plots of land – an average of four hectares – that were previously state or communal property under the Soviet Union. Over time, large investors circumvented the moratorium’s ban on land sales by setting up lease contracts. The lack of capital and the fragmentation of plots of land forced many village peasants to rent their land at derisory prices, and today thousands of these plots of land are concentrated under the control of large farms.

The war in Eastern Europe, like the pandemic before it, has not slowed down the phenomenon; on the contrary, it is precisely these crises, such as the one in 2008 with the Wall Street crash, that generate and fuel the competition of the most powerful sovereign and market actors to collude with local elites by appropriating fertile land and mineral resources for their own benefit at the expense of the peoples who have lived there for centuries.

It also highlights how digitisation is facilitating land-grabbing operations with the creation of digital registers and certifications, showing how this does not support the land rights of peasant communities, but their frustration by power-grabbers. The new information technologies, by and large, appear to be bent to the interests of land privatisation and financialisation. While Facebook becomes a space for land trading, a situation for which the social platform feels uninvolved.

Another dramatic situation highlighted by the Report and linked to land grabbing, is that of deforestation for the exploitation of natural resources – 11.1 million hectares of tropical forests lost by 2021 – in favour of the expansion of large monoculture plantations. The consequences are heavy and manifold: loss of biodiversity and related ecosystem services, expulsion of native and peasant populations, human insecurity and new tensions.

By our partners at Unimondo.org

Photo: presentation of the Report – Rome, Chapter House of the Cloister of the Convent of Santa Maria sopra Minerva.