By our reporter in East Africa, Emanuele Giordana

Somalia and the wider Horn of Africa region are facing one of the most severe droughts in decades. It is one of the elements that complicate the picture in a country with a fragile executive in a daily condition of extreme insecurity. But the drought and hunger, as shown in the UN map below (from Reliefweb), are becoming an additional danger to the promises of a rapid pacification. 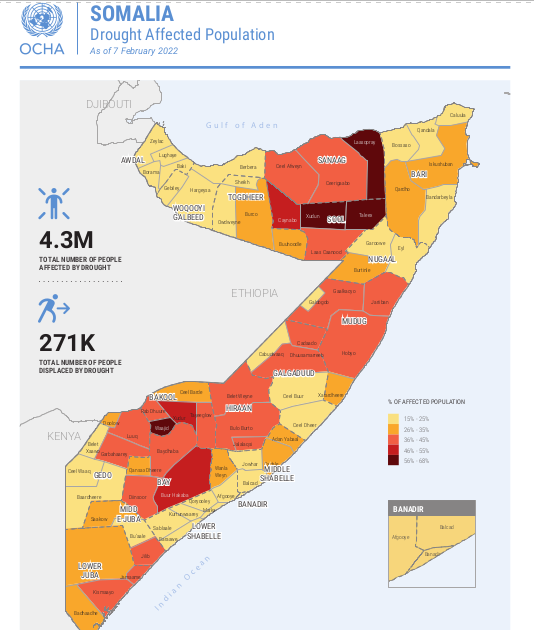 Preceded by several negotiations that had foreshadowed dates then always postponed, yet another agreement on 10 January shows that we are now getting there: presidential elections will be held in Somalia on 25 February after the elections for the House of the People, which began on 1 November 2021, are completed. It will be up to those elected to choose a new President. James Swan, Special Representative of the Secretary-General and Head of the United Nations Assistance Mission in Somalia (UNSOM) has just reported on this to the Security Council. He claims that the electoral planning has made progress but the challenges (apart from the infighting of candidates and groups) are mainly two: drought – and the consequent famine – and war, two threats that go hand in hand.

According to the UN, some 7.7 million Somalis are in need of humanitarian assistance this year, with 4.3 million affected by drought and over 270,000 displaced. According to the Somalia Food Security and Nutrition Assessment, recently published by the FAO, more than 1.4 million children in Somalia – nearly half the population under five – are likely to suffer from acute malnutrition due to the drought. Severe water shortages have also forced families to migrate to urban and peri-urban centres, adding to the 2.9 million people already displaced by conflict and climate change. Since November 2021, water prices in some of the worst affected areas have increased by up to 72%.

Additionally, the issue of war persists. Al-Shabab, Swan explained, continues to pose a serious security threat to Somalia, with the Banadir region and southwestern states serving as the Islamist guerrilla’s centre of operations. Recent months have also seen an increase in the use of improvised explosive devices and a growing number of attacks in Mogadishu that have claimed several civilian lives. Swan also recalled that AMISOM – African Union Mission to Somalia, a peacekeeping mission of the African Union under UN auspices – is currently under review.