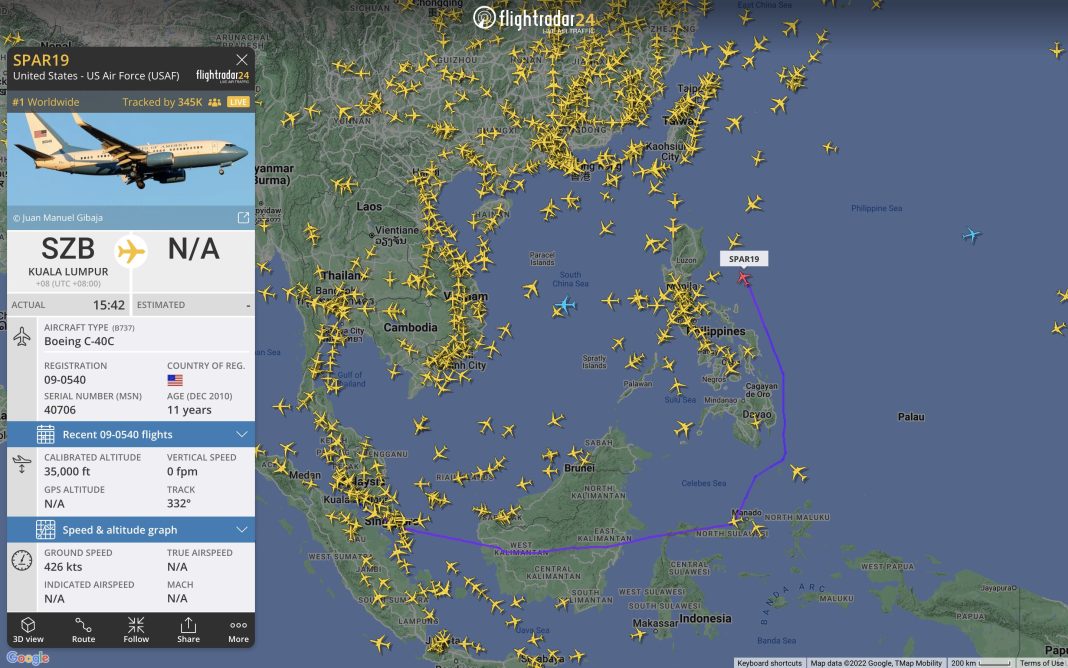 US House Speaker Nancy Pelosi, who has spent a feww days in Malaysia as the second stop on her Asia tour, is scheduled to arrive at Songshan airport in Taiwan at 10.20pm tonight (ECT). Pelosi’s Asian tour began in Singapore, where she met Prime Minister Lee Hsien Loong, President Halimah Yacob and other members of parliament, while controversy raged over the next stop in Taiwan, which fuelled tensions with Beijing. Although there were no official announcements, local Taiwanese media reported that Pelosi is expected on the island today, 2 August, becoming the highest-ranking US elected official to visit the island in more than 25 years, since House Speaker Newt Gingrich in 1997.

The visit has triggered the ire of Beijing, which considers Taiwan to be its territory, and has repeatedly warned of “serious consequences” if the trip went ahead. “If Pelosi insists on visiting Taiwan, China will take strong and resolute measures to defend its sovereignty and territorial integrity,” Chinese Foreign Ministry spokesman Zhao Lijian told Beijing, without giving details. “Those who play with fire will suffer its consequences,” Zhao said. “We would once again like to warn the US that we are fully prepared for any eventuality and that the PLA will never sit idly by.” The People’s Liberation Army is the Chinese army. Chinese President Xi Jinping, in a phone call last week with President Joe Biden, also warned the US against meddling in Beijing’s relations with the island.

Beijing’s countermoves have already arrived and overnight the PRC suspended food imports from more than 180 Taiwanese companies, a blow dealt to the local food industry, including agriculture and fishing. Chinese warplanes were spotted this morning on the median line of the Taiwan Strait and Chinese warships were present near the dividing line yesterday. Chinese aircraft reportedly repeatedly performed tactical manoeuvres ‘touching’ the median line, actions that are considered provocative.

The Associated Press, quoting several US officials, reported that if Pelosi is to land in Taiwan, the Pentagon would intensify the movement of forces and other means in the Indo-Pacific region. Fighter jets, ships, surveillance assets and other military systems will likely be used to create buffer zones to secure Pelosi’s flight to the island nation. Security on the ground would also be strengthened to prevent any incidents during the Speaker’s stay, and that if Pelosi were to continue her journey, the US would have to provide rescue capabilities, such as helicopters positioned on nearby ships and ready to leave at a moment’s notice.

The Biden administration has sought to reassure Beijing, saying there is no reason to ‘come to blows’, and that if such a visit were to take place, it would mark no change in US policy towards China. In Washington, National Security Council spokesman John Kirby pointed out yesterday that “Pelosi has not yet announced a visit to Taiwan and it is up to her to decide” and that “nothing has changed in US policy” towards Taiwan, “we do not support its independence”,

The threats of retaliation for Pelosi’s visit are another chapter in the crisis in the Taiwan Strait, and represents another blow to global markets and supply chains. Beijing sees official US contacts with Taiwan as a push towards an official declaration of independence by Taipei, de facto independence that has been real for decades, but a step the US officially says it does not support. Both China and Taiwan claim to be one country, although neither officially recognises the national government of the other. Although they have no official relations, they are linked by billions of dollars of trade and investment.

The US changed its official diplomatic recognition of China from Taipei to Beijing in 1979, but maintains informal relations with the island. Washington is bound by the Taiwan Relations Act, a federal law, to ensure that Taiwan has the means to defend itself. Washington’s ‘one-China policy’ states that it takes no position on the status of the two sides, but wants to resolve their dispute peacefully. Beijing promotes an alternative ‘one-China principle’, according to which the two sides are one country and the Communist Party is its leader. The visit to Taiwan represents the crowning achievement of a career for Pelosi, who increasingly uses her position in Congress to credit herself as an emissary of the United States on the world stage. She has long challenged China on human rights and earlier this year wanted to visit Taiwan.

Singapore’s Foreign Ministry said Lee welcomed the US commitment to strong involvement in the region and the two sides discussed ways to deepen US economic involvement through initiatives such as the Indo-Pacific Economic Framework. In October 2021, President Biden proposed an ‘Indo-Pacific Economic Framework’ as the centrepiece of his administration’s economic strategy towards the critical region. In the months that followed, administration officials worked to define the initiative’s content and consult extensively with allies and regional partners, as well as stakeholders and national experts. Public details remain scarce, but the administration has now clarified that the IPEF will consist of four ‘pillars’ of work: (1) fair and resilient trade (comprising seven sub-themes, including labour, environmental and digital standards); (2) supply chain resilience; (3) infrastructure, clean energy and decarbonisation; and (4) taxes and anti-corruption.